A Haditha Marine Speaks Out 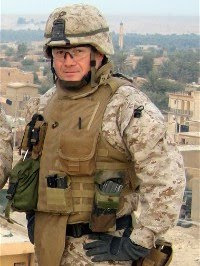 Those of you that have followed my blog over the past few years, know about my passion for the Haditha Marines.  From the moment John Murtha accused them of "cold-blooded murder", I knew, in my heart, that these brave young men were not guilty.  It's hard to believe that it has been 4+ years since this all started.  Now Retired Marine Corps lieutenant colonel Jeffrey Chessani has finally spoken out to Nat Helms over at Defend Our Marines.  The entire article is a must read but here are a few snips...

After more than four years of legal wrangling, Chessani was forced to retire last week after Secretary of the Navy Ray Mabus accepted a December 2009 ruling by a Camp Pendleton military board of inquiry that found Chessani was not guilty of misconduct after more than 23 years of exemplary service. The BOI ruled Chessani must retire anyway because he displayed “substandard performance” by failing to conduct a more detailed investigation of the civilians killed…” as a result of a house clearing counter-attack by four of his Marines.

The criminal charges against Chessani were dismissed in June 2008 when Marine Corps military judge Colonel Steven Folsom ruled that Chessani was the victim of undue command influence by General James Mattis while the distinguished general was considering whether to charge Chessani and his men with crimes. After two appeals courts refused to overturn Folsom’s ruling, Chessani was forced to endure a Board of Inquiry last December to determine whether he would be allowed to retire at his present rank.

Out of all the Marines charged in the Haditha incident, only one case has not been resolved.

Now, more than four and a half years later one enlisted Marine, Staff Sergeant Frank Wuterich, the squad leader who led the counterattack against the two houses where the civilians died, still faces 12 counts of involuntary manslaughter. Wuterich’s court martial is scheduled to begin September 13th at Camp Pendleton.


And for those in Michigan, please support Brian Rooney who is Republican running for the US House of Representatives.  Brian was Lt. Col Chessani's lawyer and a Marine brother - they served together in the 2004 Battle for Fallujah.  Also a huge thank you goes out to The Thomas Moore Law Center who was responsible for defending many of the Haditha Marines.
It's a shame that John Murtha died before he could apologize to those Marines that he slandered and befouled with his lies.  Murtha was given MANY chances to apologize but refused to and never exhibited one iota of remorse.
As far as Tim McGirk, the weasel Time Magazine reporter, whose story started the whole lie rolling, may he never have another moments peace from whatever is left of his conscience.  He did his best to destroy a group of heroes with his poison pen but fortunately the Haditha Marines were much stronger than McGirk figured they would be.  It's easy to be strong and stand firm when you have the truth on your side.  Something McGirk wouldn't know if it walked up and bit him on the ass.
If you want to know more about the Haditha Marines, you can type in Haditha in the search box.  Also read over the entries at Defend Our Marines - they were the "go-to" source for all information.
It's a shame the media refused to cover the exonerations and dismissals of ALL charges for the Marines that they convicted without a trial. Here's a photo of all the Marines charged in the Haditha incident and the results of the investigations... 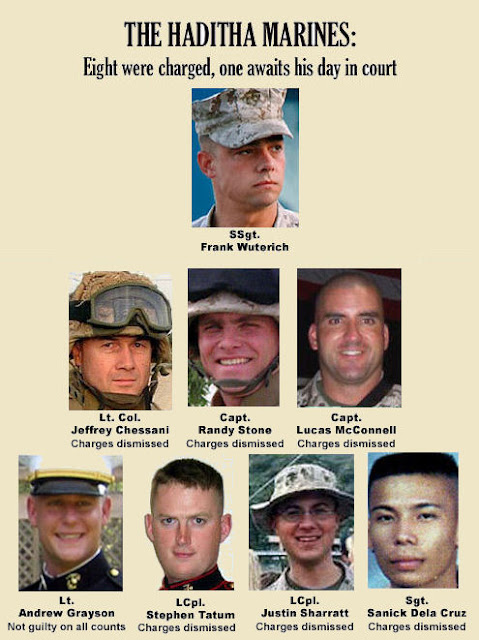