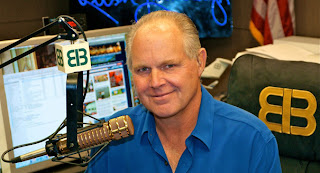 One thing about the Libs - they just love to brag about their efforts to bring down conservatives. If they even think they are having a modicum of success, they will haul their cookies to any media outlet willing to listen and regale the listeners/readers with stories of their mighty heroics against the vile right wingnuts.  The great thing about this is they sometimes end up being hoisted on their own petard.  Case in point - the recent Fluke-pocolypse against Rush Limbaugh.

Anyone that follows politics, etc knew that the whole kerfluffle was orchestrated by the Left especially when Sheila Jackson Lee started spouting off about Rush on the floor of the House.  Proving it might be difficult though - that is until someone wanted to grab their 15 minutes of fame.  From the excellent piece at Legal Insurrection...

The secondary boycott of Rush Limbaugh advertisers is portrayed in the media as a reaction to a groundswell of public outrage. In fact, the secondary boycott was initiated by and driven by Media Matters, which had a "Stop Limbaugh" campaign on the shelf waiting to be used, and was executed by Angelo Carusone, Director of Online Strategy for Media Matters.

So basically it was nothing more than a plan sitting on a shelf at Media Matters just waiting on a foot in the mouth moment from Rush.  It wasn't a grassroots campaign of regular outraged Americans - it was an astroturf plan from the Obama Zombies over at Media Matters.  And Angelo Carusone couldn't help crowing about how he worked all weekend to get Rush off the air... (also from Legal Insurrection's piece)

In the Village Voice interview, Carusone acknowledges he talked to advertisers all weekend, and that the Carbonite Saturday night announcement was a key turning point:
I started talking to advertisers on Thursday, and got a lot of feedback on Friday, and I knew a lot of movement was taking place. This was important to think about from a business perspective. The very clearest example was when Carbonite came out on Saturday night. That was significant because they had been one of his biggest advertisers, and they announced their drop after the so called apology. They said the apology didn’t matter. Rush had exposed himself as too volatile to do business with.

As it turns out, the Media Matters Get Rush Campaign was an actual failure.  Carbonite's stock tanked, Sleep Train asked to come back but was turned down by Rush and Rush has a full stable of advertisers.  AND his audience has increased in size.  If Carusone wasn't so quick to try to take credit for the campaign, you would almost think it was a brilliant bit of reverse psychology by El Rushbo himself.

Now Media Matters has awakened a sleeping giant.  We were all getting a little quiet and subdued with the GOP primary and the actual trainwreck that our nation is becoming.  But this little quest to silence conservative voices was a wake up call.  Not only have passions been raised but Rush has even started tweeting!  Coincidentally Rush's first tweet was a link to the story on Legal Insurrection.  Ahhh I love the smell of schnauzefreud at 12noon on weekdays...

Oh and by the way - I sent a copy of the Village Voice interview to the IRS so they could start billing Media Matters for taxes.  I bet the IRS was deluged with copied of the article.
Posted by Robin at 9:42 PM