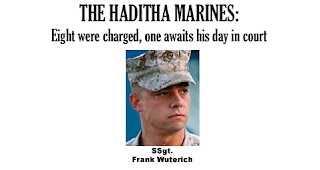 Here's a round-up of reports and posts about the latest developments in the Haditha cases...

Yesterday, charges against another Marine officer accused of involvement in the Haditha "massacre" were dismissed. Today's Washington Post printed a story, but it was
from Los Angeles Times writer Tony Perry, not a Post staffer. What's more, Perry's 10-paragraph story was printed on page A10 below-the-fold
Newsbusters

When prosecutor Lt. Col. Sean Sullivan stood up to speak, Folsom told him to sit down. When Sullivan said he wanted to raise other issues, Folsom cut him short. “Quite frankly, there are no other issues in the case,” Folsom said. With a crack of the gavel, the hourlong hearing ended.
Rick Rogers - SignonSanDiego

Interestingly - yesterday was John Murtha's birthday. What a great birthday surprise for him - another nail in his "cold-blooded murder" coffin of claims against the Haditha Marines.

Of course those on the left see the dismissal of charges against Lt Col Chessani as just another example of America's disdain for the lives of Iraqis (notice the failure to report any of the FACTS involving the cases including those "innocents" that were actually insurgents).

How can such a massacre happen (24 victims shot execution-style in three houses and one taxi) with only one possible trigger man? How can the cover-up at the highest levels of the military not be evidence of collusion or conspiracy? How can only one man merely face a possible court-martial for such a heinous crime? How can seven of eight be freed when there is 24 executed civilians, the youngest only a year old? What kind of person shoots children? The same kind that throws puppies over a cliff?
******
Justice for Iraqis in Georgies America, There is none
******
It's the same old pattern over and over again. U.S. military getting away with mass murder in Iraq. It seems the most they ever have to worry about is a slap on the wrist - because Iraqi lives are considered cheap as dirt in the eyes of the U.S. military/government:
*****
I wonder what verdict might have been reached by an Iraqi court? You know, a court composed of the survivors of the 24 dead Iraqis? The society and community that suffered the loss of 24 lives? Instead, the military grants dismissals to its comrades in arms, nobody sees any conflict of interest, and we all congratulate ourselves on the "freedoms" that those dirty rotten terrorists hate us for.

It's a shame that some people choose to remain ignorant of the facts just so they can wallow in their BDS anti-American filled swamps. Actually it's not a shame - it's pathetic.
Posted by Robin at 3:17 PM