Whackadoo Cindy was barely outta custody before she posted "her" version of events on Comrade Michael Moore and KOS' websites for her mewling syncophants to wail over. I love it when someone starts their "look at me" screed with "as most of you have probably heard..." Yeah we heard, Cindy. We heard that some dumbbat came to the SOTU wearing a hoodie with a hand-updated tshirt depicting the "odometer of death" that the left uses when they are not "politicizing" the war.

Someone needs to speak seriously to Lynn Woolsey and John Conyers about allowing someone that has threatened our President a seat in the gallery. This was definitely some type of set up for the media whore to get back in the spotlight. This was not an "oh it's toasty in here so I'll remove my jacket. Oooppps - I forgot that I had on the "Bush death toll" t-shirt EVEN THOUGH I HAD BEEN WEARING IT ALL DAY" type of moment.

Of course Cindy pulled a Michael Jackson and claimed that the police were rough with her. Now she has muscle spasms and bruises from their treatment. Oh Boo Freakin Hoo. She probably got the muscle spasms from bending over and kissing Chavez's ass over the weekend.

Does this look like someone being "hauled out of my seat and roughly shoved up the stairs"? 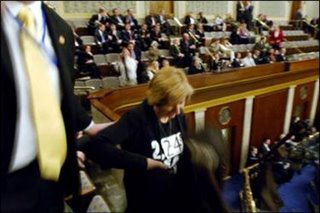 A few whining paragraphs later, Cindy admits that she wore the shirt to "make a statement". In her own words...

"The press knew I was going to be there and I thought every once in a while they would show me and I would have the shirt on."

In other words, I was hoping to get some face time on TV and had a premature ejection...

What a week we're having...Ted has a virtual implosion, Kerry gets smacked down, Alito is confirmed despite the moonbats best efforts, President Bush gives a helluva SOTU speech, the Dems are shown on tv opposing social security reform, preventing terrorist attacks and other pro-American measures and then Cindy... DAMN it doesn't get much better than this- especially for a writer!

HAHA - I thought you were talking about opening the site and seeing the picture of Helen Thomas!