Helen Thomas - We Are Not Going to Win the War 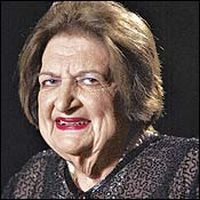 With all the excitement the past few days, I missed the Adbusters article about Helen Thomas. The article is called "Journalists Need More Courage." (musta been talkin' to Dan the memo man)

On the heroism of journalism today - "People wanted to be more patriotic and were afraid of rocking the boat. From there, we segued into a war where reporters were worried about jeopardizing the troops. So there was a heavy cloud and reporters had to fall in line for a while."

SAY WHAT? Please name me one journalist that has put the safety of the troops ahead of their latest Bush bashing screed. Certainly not anyone at the NYT, the WaPo, AP, CNN, CBS, NBC, ABC, etc.

On the main obstacles to doing good journalism at the moment - "...maybe some reporters genuinely feel they shouldn't raise uncomfortable questions at a time when patriotism is demanded. But our job is to find out the truth. That's our only job."

Note to Helen - patriotism is not demanded. I have yet to hear of someone being an unpatriotic boob getting tossed into the pokey. TRUTH? They can't handle the truth.

Finally this little perspective on America's future...
"Well, I think that we've got to pull the troops out of Iraq. We've got to stop killing. This is ridiculous. It's more than ridiculous, it's tragic. Wanton killing, killing and being killed - for what? I think the administration wants to hang in there because they actually believe they can win. But I think that's a long shot, if anything. And what is winning anyway? Winning what? A Shia theocracy? Is that what American soldiers are dying for? Furthermore, we've got to find out what terrorism is really about, find out the root causes. I think that it was right to go into Aghanistan and right to go after Bin Laden. But what about the bigger picture? Is it a religious war? Is it American policy that is motivating these people?"

Terrorism is about killing innocent people in order to further your sick agenda. Think back to Sept. 11, 2001 - that was terrorism. Think back to the Marine Barracks in Lebanon, the African Embassies, the USS Cole, etc. - THAT was terrorism. The idea that we should sit down with terrorists and discuss what America can do to make them like us more is absurd. The root cause of terrorism is HATRED, Helen. Oh yeah - we are winning and will continue to win the fight against the terrorists despite the media's best efforts to convince Americans otherwise.

And Helen doesn't understand why she is no longer on the Front Row at the Presidential Press Conferences.
Posted by Robin at 6:44 PM

Thanks for the support. I really like your site.

i think u're a loser who wouldn't know Jesus if he was standing in front of you! Try convincing every person out there that Jesus worships money instead of humanity, esentially that is what u are doing. Jesus loved everyone-sick, poor, diseased. You love hate, and beating down people, and promote only your opinion as the right one-Jesus doesn't act this way and you know it. So who do you worship? You decide. Jesus or money -you can't have both.

P.s. If you didn't understand the money bit it is in reference to promoting corporate capitalism(aka Bush and co.), instead of caring about your fellow man as Jesus would have, even if they are gay or sick or lack money to fund those churches that claim to know Jesus.

And that undignified ramble of jealousy and rage against those you don't understand is why you comment as "anonymous."

For instance (hypocrisy):
"and promote only your opinion as the right one...."

You comment as "anonymous" and I can't help but kick myself and ask, "Why and who am I really talking to?"

The answer? Another lost soul who'll be screaming and reaching out from a lake of fire as I spend eternity with the One who gives me my commandments.

Thanks Republican Vet. Don't you love the drive-by anonymous hate posters? If they had any guts they would use their name but they are too chicken.

It's the cool libertards who troll around here, spew their "anonymous" BS and then go back to their blogs and laugh with their 3rd grade buddies about it, where we can't shut them down like we do here.

Lordy ... that photo is a great weapon of mass disgustment ...