Goss Warns that "Whistleblower" is not an Acceptable Defense for Leaks 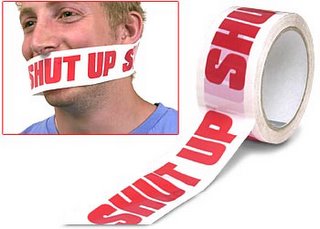 Porter Goss, director of the CIA, penned an op-ed that was published in the NY Times today. I think he's trying to tell the Slimes something...

"At the Central Intelligence Agency, we are more than holding our own in the global war on terrorism, but we are at risk of losing a key battle: the battle to protect our classified information."

"Judge Laurence Silberman, a chairman of President Bush's commission on weapons of mass destruction, said he was "stunned" by the damage done to our critical intelligence assets by leaked information. The commission reported last March that in monetary terms, unauthorized disclosures have cost America hundreds of millions of dollars; in security terms, of course, the cost has been much higher."

Then Goss explains the difference between a "whistleblower" and a "leaker". So much for using the "I am a whistleblower" defense.

"On the other hand, those who choose to bypass the law and go straight to the press are not noble, honorable or patriotic. Nor are they whistleblowers. Instead they are committing a criminal act that potentially places American lives at risk. It is unconscionable to compromise national security information and then seek protection as a whistleblower to forestall punishment. "

Now THAT is gonna leave a mark!

Goss then nips the "ignorance" defense in the bud...

"This information was attributed to unnamed intelligence officials who "spoke on the condition of anonymity because of the effort's secrecy." Whether accurate or not, this is a direct acknowledgment that these unnamed officials apparently know the importance of secrecy."

As if jeopardizing out national security was not enough, those that disclose classified info are endangering our allies' security...

"Such leaks also cause our intelligence partners around the globe to question our professionalism and credibility. Too many of my counterparts from other countries have told me, "You Americans can't keep a secret." And because of the number of recent news reports discussing our relationships with other intelligence services, some of these critical partners have even informed the C.I.A. that they are reconsidering their participation in some of our most important antiterrorism ventures. They fear that exposure of their cooperation could subject their citizens to terrorist retaliation. "

One of Goss' statement should strike fear in the heart of James Risen, Dana Priest, etc.

"Since becoming director, I have filed criminal reports with the Department of Justice because of such compromises. That department is committed to working with us to investigate these cases aggressively. In addition, I have instituted measures within the agency to further safeguard the integrity of classified data."

Enough is enough! The leaks are much more of an issue than wiretapping Al Qaeda's phone calls. Why Congress is spending our money investigating something that the majority of Americans approve of, is beyond me. Determining WHO leaked classified info is much more important than pandering to the kooky "impeach Bush" KOS crowd. The Liberals refuse to accept that fact. Just another reason that we have to keep the DNC out of power...
Posted by Robin at 4:24 AM