Jill Carroll: You Read and You Decide

I have kept quiet about my unease with the whole Jill Carroll kidnapping in Iraq. Every since the German hostage, Susanne Osthoff, was found with some of the marked money from her ransom, I am skeptical about hostages. I know it sounds cold hearted and hateful but I just find it hard to believe Carroll’s kidnapping is not some type of setup. Number one – she has been in Iraq for several years. Her rationale for being in Iraq was to report about the fate of the Iraqi people. In photos taken prior to her kidnapping, Carroll was dressed in typical Iraqi woman garb and spoke fluid Arabic.

According to a friend of Carroll –
She loved this country and its people. She sympathized with its sufferings and committed to tell the truth. When I talked to her about how the Iraqis live, she always cried. She cried for the sufferings of Iraq more than Iraqis. She has the nicest heart in this world. When I blamed Iraqis for what is happening in the country, she said “don’t blames the Iraqis. You should blame the governments for what they do.”I remember once we were chatting and I asked her, “so where is home for you?” And without hesitation or a moment to think, she said “This is home. Iraq. Why? What’s wrong with that?” and as the chat goes on, at some point she smiled and said “I know my fate is in Iraq.”

After her kidnapping, her father sent a message to the kidnappers:
"I wish to speak to the men holding my daughter. I hope that you heard the conviction in Jill's voice when speaking of your country. That was real. She is not your enemy.
When you release her alive, she will tell your story with the same conviction. Alive my daughter will not be silenced.
Yours is a story which can be told to the world by Jill. Allowing her to live and releasing her will enable her to do so.
As you know by now, my daughter is honest, sincere, and of good heart. Her respect for the Iraqi people has been shown through her words as a reporter.
Jill started to tell your story, please, allow her to finish it.
Through the media if necessary, advise her family and me how to initiate a dialogue which will lead to her release."


Since Carroll has been kidnapped, her captors have set deadline after deadline demanding the release of all female prisoners in Iraq. Each time, the deadline passes and the captors set another one. Carroll has appeared in a total of 4 hostage videos. All but one showed her calm and matter of fact.

Even Carroll’s hostage videos are completely different from every other hostage video. Many of the hostages show visible physical signs of maltreatment. Most are blindfolded and bound. Most are dirty and unkempt. But Jill has not appeared that way in any of her videos. She was not blindfolded in any of the videos. She did not appear to be bound and was not dressed in an orange jumpsuit. In the last 2 videos, Carroll has appeared clean and neat with an Iraqi headcovering. She shows no external signs of trauma or malnutrition.

The AP article, Kuwait TV: Carroll Kidnappers Set Deadline, by Diana Elias confirms Carroll’s hostage conditions:
"People close to the kidnappers told the private TV channel earlier Friday that Carroll is "in a safe house owned by one of the kidnappers in downtown Baghdad with a group of women," Jassem Boudai told The Associated Press.
He said the sources told Al-Rai that Carroll was in good psychological condition and was doing housework with the other women in the place where she was being held."

While searching the Internet for pictures of hostages, I came across an article about Carroll’s first video. It was on the ITN website, a UK based news site. There was a picture posted with the article that showed women dressed in Burkas with Palestinian scarves and holding firearms. I could not find any caption to go along with the picture but thought it was strange that the picture was posted with an article titled “Captive Journalist Shown on TV”.

Amazingly, the exact same image appeared on Google Image Search along with an article about Jill Carroll’s first video.

Having a major tinfoil hat moment after finding the picture connected to the article about Jill Carroll, I started playing with transparent overlays of the various pics of Carroll. 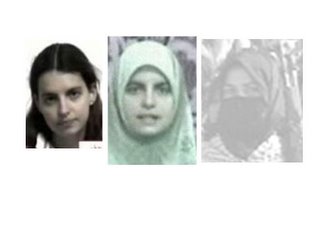 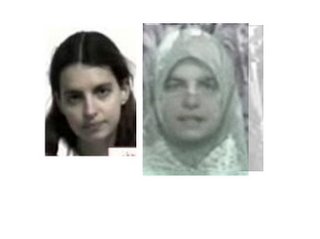 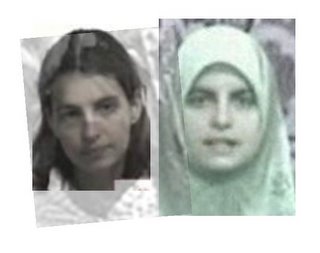 If her statement was not scripted, the use of the word "we're" may have significant connotations. The way people use pronouns can imply psychological distance or connection between the victim and the perpetrators. She could have said "I'm sending" or "they're sending", but instead she used "we". Words can reveal the truthfulness of a statement, but I'm not sure how to read this." 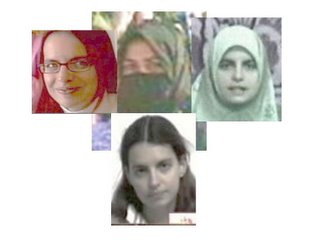 Like T-Bone says in his post, I hope I’m wrong and just having a conspiracy theory moment. But my gut tells me otherwise. Only time will tell… Read the info and check out the links for yourself. Then make up your own mind. If you would like more info, email me. I have put together a video of the various images found on the Internet for comparison (I don’t know how to post the video here).