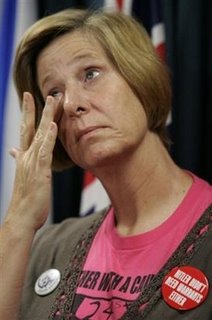 One of my favorite blogs, Sweetness & Light, has a great post about Cindy Sheehan's latest all expense paid vacation to spread her message of hate. Cindy was in Canada and asked the Canadian government to provide shelter for military deserters. She also came up with ANOTHER twist in the ever-evolving story about Casey's military service. Per the AP...

"Before her son left, he told Sheehan he disagreed with the war and with the president’s decision to send troops.
"I told him, ‘I’ll do anything. I’ll take you to Canada. Let’s go to Canada, or if you don’t want to go to Canada, then I’ll run you over with my car and break your legs,’" she said.
Sheehan said the U.S. government lied to her son and other soldiers by telling them they wouldn’t be forced to participate in war if they signed up…"

Thanks to all the enemedia coverage of Saint Cindy, her ever-changing proclamations about Casey's feelings towards military service are easy to find. (That is one thing we can thank the media for) But Sweetness & Light found a video from a television interview that exposes Mother Sheehan as a liar. The woman actually refutes her own claims. See for yourself here.

Look closely at the picture above... I guess the "Hitler Didn't Need a Warrant Either" button is the latest fashion statement for America hating liars.
Posted by Robin at 9:05 PM