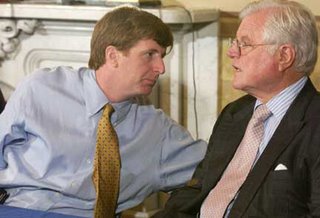 Rep Patrick Kennedy, son of "Splash" Kennedy was involved in a single vehicle accident early this AM. According to Brietbart News...

"Rep. Patrick Kennedy crashed his car near the Capitol early Thursday, and a police official said he appeared intoxicated. Kennedy said he had had no alcohol before the accident. "

Reports also claim that Kennedy did not get tested for alcohol. It has also been reported that "higher ups" in the Capital Hill Police Dept whisked Kennedy away and drove him home.

According to a News Alert during Hannity and Colmes, Rep Kennedy just released another statement to the press. In this one he blamed Phenergan (which he was taking for gastritis) and Ambien for making him disoriented. Oh yeah... blame it on the Ambien since they recently released a study about Ambien causing confusion and sleep walking...

Like I said, the nut doesn't fall far from the tree. One thing about it, Patrick Kennedy learned from the master. Can anyone say "double standard"?
Posted by Robin at 9:54 PM