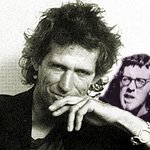 While waiting for the Moussaoui verdict I was surfing through various news outlets and came across this update on Keith Richards. For those of you that missed it, Richards fell out of a palm tree while on vacation and suffered a mild concussion.

Now according to The Sun, Richards has been diagnosed with a small brain hemorrhage that needs to be removed. I know it is not funny or something to joke about but this comment from one of his "pals" left me in stitches...

“After the tests doctors decided they should drain his skull. It has given him a scare but he has been told that he should make a full recovery once it’s done.”

Judging from recent pictures, it looks like someone beat the doctors to it.
Posted by Robin at 4:04 PM