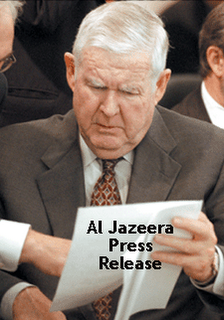 Is John Murtha just determined to undercut our military or is he so afflicted with BDS that he cannot think straight? He has turned into the male version of Cindy Sheehan - if there is a microphone or a camera jump in front and start giving the terrorists more encouragement and incentive.

According to a report in The Marine Times, Murtha received another briefing from the Marines about the Haditha incident on Wed. The door to the briefing room had barely closed behind him before he was spewing forth details from the briefing and giving his own take on the situation...

"A key member of Congress said he “wouldn’t be surprised” if a dozen Marines faced courts-martial for allegedly killing Iraqi civilians Nov. 19. Rep. John Murtha, D-Pa., told Marine Corps Times that the number of dead Iraqis, first reported to be 15, was actually 24. He based that number on a briefing from Marine Corps Commandant Gen. Mike Hagee on Wednesday."

"Hagee visited Capitol Hill in anticipation of the release of two investigation reports, which are expected to show that among the 24 dead civilians, five of the alleged victims, all unarmed, were shot in a car with no warning, Murtha said. The killings took place in Hadithah, 125 miles northwest of Baghdad. At least seven of the victims were women and three were children."

Now contrast what the fat blow-hole said with the comments from the Marine Corps...
"Col. David Lapan, a spokesman at Marine Corps headquarters. “The investigations are ongoing, therefore any comment at this time would be inappropriate and could undermine the investigatory and possible legal process,” he said."

Sadly Murtha has lost the ability to determine what is appropriate. Guess that Essence of Code Pink has soaked into his soul...

Murtha also gave an interview to Alan Colmes yesterday. As loathe as I am to give any hits to the site, here is a link to part of the interview. Here's a few snippets... (my comments in parenthesis)

“They try to sanitize this war by saying everything’s going fine, everything’s alright and what I want to point out is what it’s doing not only to the troops, themselves..." (Far from trying to sanitize the war, we are trying to get the truth out there instead of the DNC MoveOn talking points)

"But the big thing is, 42% of them don’t know what the mission is, 80% of the Iraqis want us out of there.” (There's more of those damned Code Pink talking points)

"80% of the Iraqis want us out of there. 47% say it’s OK to kill Americans. The public has turned against this.” (Once again, Code Pink talking points)

If you want to read a terrific smackdown to Murtha, go read W. Thomas Smith's article In Cold Blood. These last two paragraphs from Smith's article should be shoved in Murtha's face every day. Every time Murtha speaks, the paragraphs should appear on the bottom of the screen as a Disclaimer...

"When I was a young Marine-recruit, I was taught there is no such thing as an ex-Marine: Marines are either active, reserve, retired, former, or dead; thus the adage, “Once a Marine, always a Marine.”

"The only ex-Marines were those whom did not make it through boot camp; or as we liked to say those not packing the gear to serve in the Corps. The only other way for a Marine to become an ex-Marine would be to shame or denigrate the Corps in such a way that he would essentially be excommunicated, which – it pains me to say – is what Colonel Murtha should be. "

Thank you Mr. Smith - not only for your service but for speaking for the Marines fighting for our country.

On a lighter note, Psycmeister's Ice Palace has a great new song in honor of Murtha. The song, "Murtha Went Down To Washington", is to the tune of the Charlie Daniel's hit, "The Devil Went Down To GA". It is GREAT and I think Charlie D. should record it as a single!
Posted by Robin at 8:22 AM