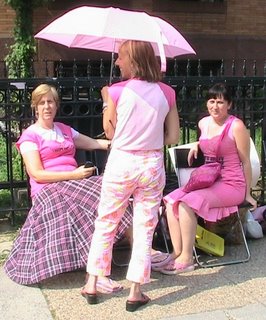 Last year it was Katrina - this year it's terror alerts and the war between Israel and Hezbollah. Poor Cindy just can't get a permanent place in the spotlight. Hurricanes and the war on terror keep usurping her 15 minutes. What to do? What to do?

Do what any self-absorbed media addict does - go to the ER for treatment of some vague malady. From KWTX...

(August 11, 2006)—Anti-war activist Cindy Sheehan was being treated Friday evening in the emergency room of Providence Health Center in Waco.
Sheehan, who has been on a liquids-only diet for 37 days as part of a fast in protest of the war, was described as being gaunt and pale as she arrived at the hospital.
An assistant said Sheehan, who flew to Central Texas after a trip with other activists to Jordan to meet with members of Iraq’s new parliament, was being treated for exhaustion.

She's probably exhausted from all of her gratis trips around the world to bash the United States and President Bush. It certainly can't be her "fake fast". Cindy told Randi Rhodes in early August that she broke her fast... (hat tip to Sweetness & Light) 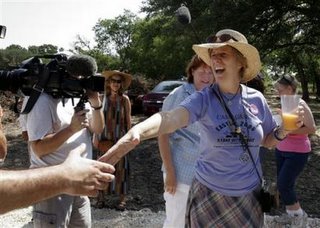 And we know what she ate while "fasting" in Venice, Italy...
"When I was on a layover in Madrid on my way to Venice, Italy yesterday, the closest thing I could find to a smoothie to get a little protein was a coffee with vanilla ice cream in it."

Maybe she was pining for Medea and Gael who are on tour in Lebanon...

BTW - the pics are from this past week...