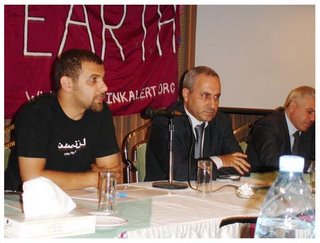 Have you heard about the young Muslim man who was forced to change his shirt at JFK Airport because it said "We Will Not Be Silent" in English and Arabic? Here's a piece of the story from Newsday...

"An Arab human rights activist says he was prevented from boarding a plane at Kennedy Airport while wearing a T-shirt that said "We will not be silent" in English and Arabic. The incident happened Aug. 12 when Raed Jarrar, 28, was preparing to board a JetBlue flight from Kennedy to Oakland, Calif. Four officials from JetBlue or from a government agency stopped him at the gate and told him he couldn't get on the plane wearing his shirt, Jarrar said in a telephone interview yesterday."

Such a politically correct way of describing this person. Raed Jarrar is not an "Arab human rights activist" - he is an Iraqi blogger who is part of the Global Exchange socialist organization started by CodePink's Medea Benjamin. Raed Jarrar is the director of the Iraq Project at Global Exchange and is an analyst for Foreign Policy In Focus. Jarrar also was one of the attendees at the Peace Summit in Jordan with Cindy Sheehan, CodePink, Tom Hayden and others. (see the above picture - he's wearing the same shirt). He's also "fasting until the troops come home". Interestingly Jarrar met with the CodePinko's when they went to Jordan to give financial assistance to "the other side" in Fallujah.

Here's some comments from Jarrar courtesy of his blog and articles he has written...

"It sucks to be an Arab/Muslim living in the US these days. When you go to the middle east, you are a US tax-payer destroying people's houses with your money, and when you come back to the US, you are a suspected terrorist and plane hijacker."

"I was called by two young Lebanese people, and they asked me whether me and the rest of the delegation visiting their shelter where coming from the US. I said yes. They said: "you better get the hell out of here unless you want us to make a scene". I tried to explain that we are the "good" Americans who are against the war, so they said go back home and change your government"

"Because most of the people who support the occupation are violent assholes. That’s why. They are intimidating violent gangsters backed up by the bush administration. They should be held accountable for each murder done by the illegal occupation of Iraq. Everyone who supports the occupation is personally responsible for the death of every Iraqi who is killed because of the illegal US invasion. Supporting the occupation is not a club for proving your patriotism, it’s an action affecting the lives of millions of people, and it’s an action affecting the lives of the troops themselves"

"Where is the difference between Bush and Bin Ladin? Both are extremists that can kill! Violent extremists."

Jarrar's mother, Faiza Al-Arji, was one of the Iraqi women brought to the United States by CodePink as part of their "Women for Peace" anti-war protest (the one that got Cindy and Medea arrested).

So do you think that it was an accident that Jarrar wore the TShirt to board an airplane just 2 days after the London Bombing plot was uncovered? Well my mom always said you are known by the company you keep. Seeing as Jarrar is one of the Global Exchange CodePink Sheehanites, I'm betting it was not just a coincidence.

But don't expect the media to tell you anything about his background. As far as the media is concerned, Jarrar is just another Muslim that was profiled and suffered violations to his civil rights. I smell the ACLU moving in...

I did think that this comment from one of the airport security agents was funny -
"Going to an airport with a T-shirt in Arabic script is like going to a bank and wearing a T-shirt that says 'I'm a robber"
Posted by Robin at 9:24 PM