Green Helmet Takes One For The Team 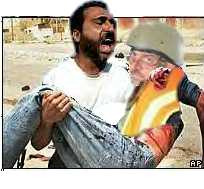 We all knew that it would happen sooner or later. The last thing any self-respecting terrorist organization wants is exposure of their propaganda machine. Mr. Green Helmet had to take one for the team...

Two rescue workers, including the chief of the Lebanese Red Cross in Tyre, Salam Daher, were wounded by shrapnel during raids near the hospital where they had been rushing to help extinguish the fire, police said.

At least Mr. Green Helmet got a promotion out of all his media exposure. When this all started, Mr GH was classified as a refrigerated morgue truck driver. He has since progressed to rescuer, civil defence member, civil defence leader and propaganda producer. And who said Hezbollah did not offer opportunities for advancement? Speaking of Hezbollah, their other rescuers have to find new digs...

Israeli fighter-bombers carried out over three dozen raids in the eastern Nabatiyeh region, destroying a three-story building and two structures used by Hezbollah's rescue service. Police were unable to provide any information about casualties.

If you have not seen the sites of two of the newest bloggers, you are missing out on a momentous occasion and quite a treat.

Stop by and Say Hello to Green Helmet Guy. When you're done, go pay a visit to White TShirt Guy. You won't be sorry! (hat tip to Mike for the heads up)
Picture above from EU Referendum!
Posted by Robin at 4:25 PM