How Dare Anyone Question the Media's Motives!

UPDATE 8/26/06: Seems Mr. Greg "Holier Than Thou" Mitchell has a view skeletons in his journalist closet... The hypocrisy and absolute arrogance is overwhelming. Damn Karma is a bitch... Extreme Chickenhawk Express Salute to MD Conservative for the heads up!!

******************
Greg Mitchell over at Editor & Publisher is not happy about the blogosphere asking questions about the Qana photos. He's so upset that he wrote a 2 part complaint piece. Lots of blame and finger pointing at those asking the questions but takes no responsibility for the media's complicity with the terrorists' propaganda disemination...

I mounted a defense of the overwhelming number of press photographers in the Middle East who bravely, under horrid conditions, in recent weeks have sent back graphic and revealing pictures from the war zones, only to be smeared, as a group, by rightwing bloggers aiming, as always, to discredit the media as a whole.

**Rightwing Bloggers do not have to smear the media – the media does a fine job all by itself.

But, in general, the serious charges and wacky conspiracy theories against the photographers, and their news organizations, are largely unfounded, and politically driven, while at times raising valid questions, such as what represents "staging."

Keep in mind, in considering all of these charges, that almost without exception, the bloggers are basing their comments on photos posted on the Web in compressed jpeg form, with little true detail possible. So when they write, for example, about people or props being "planted" at the site of an explosion -- the only evidence for this being the apparent lack of dust on their surface -- remember that sharp detail and true surface texture are not visible in Web photos.

**Wacky conspiracy theories? What about the “Cleaned up Faces and Moving Spots of Blood”? What about the Hezbollah video that clearly shows Mr. Green Helmet and Mr. White TShirt timing their “rescue runs”? What about AP Stringers that also serve as Lebanese Red Cross volunteers and just happened to work the first Qana incident?

One photog, Stuart Isett, asked, referring to rescuers in Qana displaying the body of one child over and over: “How are the pictures misleading? The child is dead and the subject was showing this to the cameras—that’s how any intelligent reader would view these images. The man in the image has every right to show this dead child to the world—this happens all the time in terrible situations. 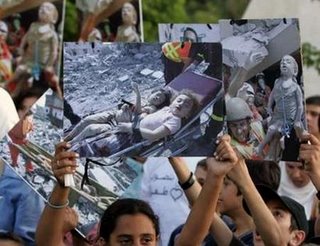 But it is interesting to note the complete lack of photos of the dead and injured in Israel. In less than 1 day, the pictures from Qana were reproduced for protest signs and banners.


“What this is all about, is an attempt by right wing blogs to muddy the waters and somehow claim, like Michele Malkin and Rush Limbaugh have, that Qana and all the other civilians deaths in Lebanon are staged." 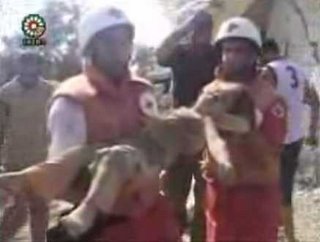 No one denied that the victims were killed. People walking around in circles with the same body and directing photographers to a location for a better shot is called “Staging”.

So tell me, give me proof: how many blogs are actually more accurate than the papers? In what areas exactly are they more accurate? How, in fact, are they comparable in any way, since as I pointed out above most blogs are not journalism, they are commentary after the fact? This is like comparing apples and oranges.”

None of the blogs linked here has proven to be very accurate with the exception of the criticism of Hajj, which is an obvious case. The rest are all unproven and mired in specious argumentation. 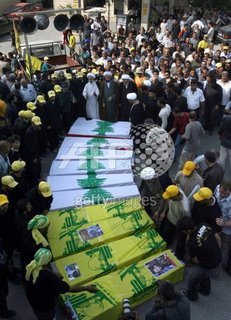 You mean like the reports of no Hezbollah in Qana trumpeted through the media? What about the mystery of the varying death toll numbers?


And none of this changes the essential, and most important fact that a group of photographers put themselves at great risk to show the result of an Israeli air strike on an apartment building that left 28 people – among them 16 children – dead.

This broad condemnation, and the conspiracy theories, lodged against photographers in war zones -- who are risking their lives while bloggers risk nothing but carpal tunnel syndrome -- needs to be refuted. 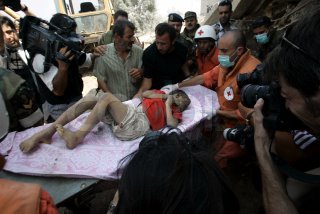 What risk? There were no bombs dropping during the photo shoot. The only danger the photographers faced that day was getting trampled by the hordes of “press people”.
Refute away Mr. Mitchell. We are still waiting for the release of the contact sheets, the unedited photos and videos, etc. Until then the pictures truly speak for themselves.


Many bloggers appear ignorant of time-stamping and the fact that photos are often posted on Web sites out of sequence.

The time-stamping issue was brought up initially and then discarded as not being relevant. But the media has still failed to release the original shots with the original time stamps.

“I just want to point out that Hezbollah isn’t the only organization trying to get its propaganda in the news. I cover a lot of stories here in Jacksonville where the people I’m photographing have their own agenda and want the story slanted in their favor. All I can do on an editorial assignment is document what happens. For my personal work or for an ad shoot the rules are different, but for a newspaper or a magazine we have a certain obligation, I think, and it’s good to be reminded about that every now-and-then.

Oh Dear Lord – how can someone seriously compare the propaganda dished out by Hezbollah and willingly lapped up by a complicit media to agenda driven stories in Jacksonville. When one of those Jacksonville agenda driven stories stokes the fire of US and Israel hatred and incites the terrorist masses, then you can make that comparison. Until then you are just being plain stupid.

“I’m not the least bit worried about the state of journalism or how we’re covering these stories and presenting them to our audiences. Our viewers are smart and know when they’re being fed crap. The critics of journalists have already made up their minds and no matter how perfect we are their opinions won’t change. All we can do is be honest and present our work in an ethical manner.”

The public is smart – that is why they are not buying the media’s crap. The media consistently places itself on a pedestal claiming “professionalism” when in fact the bias and distortion reeks of a complete disregard for journalistic ethics. We don’t expect the media to be perfect but some honesty would be a refreshing change.
Posted by Robin at 10:15 PM