Is Smoke a Chemical Weapon?

Dontcha love it when you are right?

Little Green Footballs has a German video that completely debunks the "Israel used chemical weapons in Lebanon" theory that has saturated the media. The video has scientific proof with REAL doctors, researchers and experts in chemical weapons. Unlike the moonbats and pro-Hezbollah groups who had Wayne Madsen as their "source". Click the link and see it for yourself - then pat yourself on the back for searching for the TRUTH!!

And a brief note on the video - The video includes a segment that debunks this picture that those anti-Israel groups claimed was a chemical weapon... 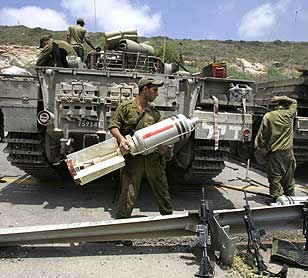 The loyal readers of Chickenhawk Express will recognize this picture...

Back on July 20, 2006, I exposed this picture and Wayne Madsen's chemical weapons claims as a lie.

When Caught in a Lie Just Keep Making Things Up

Chickenhawk Express - always on top of things and doing the job the media fails to do!
Posted by Robin at 11:55 AM