The Hezbollah apologists in the media are claiming that the coffins covered with Hezbollah flags at the mass burial in Qana were members of the terrorist organization that were killed in OTHER attacks, not Qana. Quite a convenient excuse for the four Hezbollah coffins and the mass of Hezbollah flags, hats and shirts.

From the Voice of America News...
Twenty-six of the coffins were covered with Lebanese flags and three of them with yellow Hezbollah flags. Those were the coffins of Hezbollah fighters from Qana, but the militia said they had been killed elsewhere -- in Bint Jbail and Ait Esh Shaab.

Maybe someone should teach the VOA News how to count... 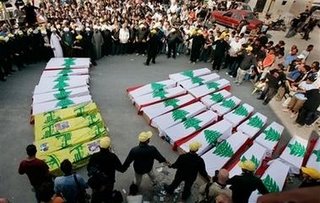 From the Miami Herald... Hezbollah members on a pickup truck led the funeral procession in Qana, calling out to the crowd of hundreds. The people wept as they followed the coffins. The procession included the bodies of four Hezbollah fighters who were killed in separate incidents. The fighters' coffins were wrapped in green and yellow Hezbollah flags, and those of the people killed in the airstrike were covered with Lebanese flags.

As usual, I am having to do the work that the media absolutely refuses to do. In this video at the 02:15 mark an interview begins with Zeinab Ahmad Shalhoub, a "survivor" of the attack. Make note of the scars on her left cheek.

Now compare the woman in the video with these pictures. 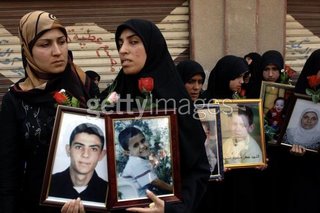 It is obvious this is the same woman. 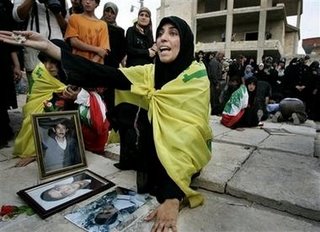 Gee.. She is wrapped in a Hezbollah flag. Maybe she was cold. Notice the picture she is holding of the young man in the black shirt... 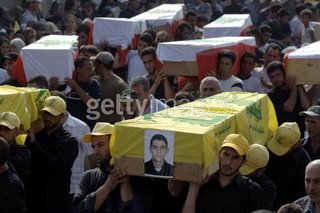