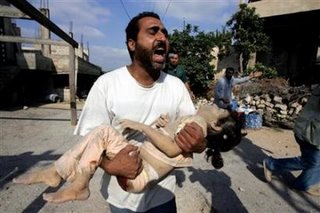 Have you ever been so bogged down in researching minutia that you completely overlook the elephant in the room? Well that's how I feel today.

After all the researching and analyzing the information available from Qana, I happened across the positive identification of Mr. White TShirt. And I found it in a report and video that I watched right after the incident - I just never made the connection.

Kevin "pretty boy" Sites went to the Qana site and interviewed some of the "residents". One of those resident was White TShirt guy. Sites wrote up an article based on the interview and low and behold - there was a name with the exact quotes that White TShirt guy made in the video.

Mr. White T-Shirt's real name is Ghazi Adibbi. I know that the picture I posted of him earlier was with a woman and child with the last name "Shalhoub" but this time we've got an article AND the video. Who knows - I'm finding so many variations on names of people involved with Qana that who knows what the REAL names are.

Here's a couple of the quotes from the Sites' article...
"They were just farmers and couldn't leave their fields," Adibbi says. "Besides, who has the money ... to get to Beirut?"
Despite what has happened here, Ghazi Adibbi says he and the others that are left will likely stay in the village. What has happened has hardened his heart about the conflict.
"We are resisting. We don't want a cease-fire anymore," he says. "We want the resistance to bomb Israel every day."

Go to the article and click on the first video link that starts with "In the chaotic aftermath at Qana, casualty figures differed" to see for yourself. For those of us that are still researching the media's absolute complicity with the terrorists in Qana, this is BIG info.

An Update: The research into the Qana victims and witnesses, the timeline and a possible conclusion will be unfolding through this next week. Then I promise I'll get back to blogging about other stuff. Bear with me - I think you are going to be shocked at the FACTS about the incident.
Posted by Robin at 10:18 PM