Arianna Huffs "So What?" About Saddam Murdering Kurds 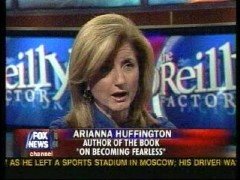 I saw this with my own two eyes and just about fell outta my chair. From Newsbusters...

"Putting aside the fact the Arianna Huffington dubiously implied on tonight's Factor that Bill Buckley and Chris Shays agree with John Murtha about a strategy for Iraq, what was frankly unbelievable was her ignorance and abject indifference towards the plight of the Kurds under Saddam Hussein. Huffington argued that the Kurds were free before we invaded Iraq, that their situation has not changed "one iota" since the invasion, and even replied "so what" to O'Reilly's assertion that Saddam persecuted the Kurds."

She said it - there is no way to spin it. Even Bill O'Reilly looked kinda shocked at her comment and repeated it but she did NOT correct it. Oh yeah - Arianna spouted the same old tired talking points that the Left has been screeching about for 4 years. It just makes me even more sick hearing it in her heavily accented voice.

Watch the video for yourself here.
Posted by Robin at 12:15 PM