Taking Down the Terrorists - One At A Time 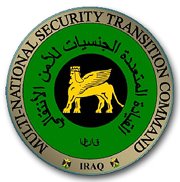 No matter how many negative stories the media throws out into the public, there are still good things happening in Iraq. Yes there are still terrorist attacks but the Iraqis are learning how to fight back, thanks to our brave men and women. Here is an update about Iraqi police training from CentCom.

"The officers of Baghdad’s Rusafah Police Directorate believe that through proper training, hard work and advanced technology they can rid the city of insurgency and terrorism. The directorate recently unveiled some of its tools, showcasing a bomb-sniffing dog and a new secure communications system. The police also demonstrated an advanced detainee database and an improvised explosive device-detecting robot."

To the naysayers, I'm sure this sounds like "nothing" but this is quite a big deal for the Iraqi Police and another step toward Iraqis taking care of Iraq. You gotta love this comment from Iraqi Police Gen. Adnon, commanding officer of the Rusafah Directorate...

“To the terrorists I say: ‘Beware. We now have the tools and the skills to defeat you, our officers are no longer sitting waiting for you. We are going to take the fight to you, find you and those who support you and in the name of Iraq, we will defeat you.’”

It's a damn shame that many Americans don't have that same fire in their belly.

On a related note, one of our Unmanned Drones helped our soldiers capture terrorists firing mortars into civilian areas in Khan Bani Sa’ad, south of Baqubah.

"The suspected Anti-Iraqi Forces attempted to hide the car in a palm grove then fled on foot in opposite directions. Upon arrival at the scene, 1-68 CAB detained two of the men who had jumped into a nearby irrigation canal. The unit found the sedan along with one 120mm mortar system and six AK-47 magazines."

GOD BLESS OUR SOLDIERS AND OUR COUNTRY!