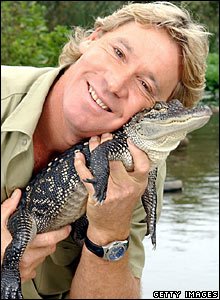 This breaks my heart...

Australian naturalist and television personality Steve Irwin has been killed by a stingray during a diving expedition off the Australian coast. Mr Irwin, 44, died after being struck in the chest by the stingray's barb while he was filming a documentary in Queensland's Great Barrier Reef. Paramedics from Cairns rushed to the scene but were unable to save him.

I always enjoyed his show. He truly enjoyed his work and it showed. A sobering and thought-provoking reminder on Labor Day. Prayers to his family and his friends.


UPDATE FROM THE DISCOVERY CHANNEL:

To honor Steve and the enormous contribution he made to the world and to our company, DCI will rename the garden space in front of Discovery's world headquarters in Silver Spring, Maryland, the "Steve Irwin Memorial Sensory Garden."

DCI is looking at the creation of the Steve Irwin Crocodile Hunter Fund, which we'll affectionately call "The Crikey Fund" to honor Steve's passion and exuberance for conservation and the animal kingdom. This fund will allow people from across the globe to make contributions in Steve's honor to support wildlife protection, education and conservation. The fund in addition to contributions by DCI will also aid Steve's Australia Zoo in Breewah, Australia as well as educational support for Bindi and Bob Irwin.
Posted by Robin at 9:26 AM