Guess Who Is Coming to Lunch?

This Thursday, September 7, is going to be quite a day here in Savannah. Max Burns is holding a fundraiser at the Mighty Eighth Air Force Museum. Max is the Republican trying to unseat John Barrow for the 12th Congressional District seat in the House. The fundraiser should bring in a great deal of $$ for Max's campaign. Why the prediction of big $$? Maybe it has something to do with the featured speaker at the luncheon... 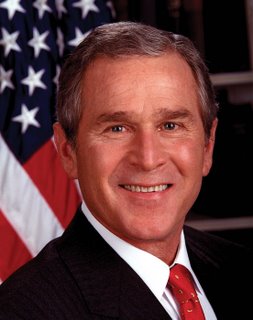 "President Bush is coming to Chatham County for Max Burns - a signal that the national Republican Party is going all out for the Georgia congressional candidate. Bush is to be the featured speaker at a Sept. 7 fundraising luncheon for Burns at Pooler's Mighty Eighth Air Force Museum."

Guess who is going to be there? ME!! I got the invite via email last week and have been on cloud nine since then. I am just one of the "regulars" so I won't get the meet and greet with the President. BUT I will get to hear him speak live and in person. I'm taking my Dad as my guest since he is a staunch Republican and a strong supporter of the President. I did ask my Dad if there was anything in his background that would prevent him from passing the security screening -just in case.

When I wrote my first book I told my Dad that I wanted to meet Sean Hannity. Believe it or not, I won two tickets to the 2004 Freedom Concert in New Jersey and got to meet not only Sean but Col. Oliver North and Mark Levin.

When I found out "Quagmire" was going to be published, my Dad asked me who I wanted to meet now. I told him I was going for the top - I wanted to meet President Bush. Well, I won't get to shake his hand but I'll get to hear him speak. For a "country girl" from Georgia, it is an honor.
Posted by Robin at 8:49 PM