Just When You Thought Ted Rall Could Not Go Any Lower...

I don’t even know why I bother but I frequently check out the editorial cartoons on yahoo.com. Sometimes they are funny (yes I do laugh at some of them that reflect poorly on the Republicans because they are usually spot on) but most of the time I feel like I’ve been hit in the gut when I read them. Today was one of those days.

I made the unfortunate choice of clicking on Ted Rall’s editorial cartoon for 9/16/06. It is one thing to ridicule the President politically but another to attack him in a personal manner that hurts his family. The same thing goes for Secretary of State Condoleeza Rice. Why would anyone think it was appropriate to do an editorial cartoon about the sex life of Madame Secretary? Rall has already depicted Sec. Rice in a racist manner so I guess portraying her as a whore is no big deal to him.

According to Rall’s little drawing, Rice has slept her way around the world including a one night stand with Chirac. Rall then promotes the sick fantasy that so many Libs are obsessed with by depicting the President of the United States in bed with Madame Secretary. Rall’s caption for that panel is simply nauseating – “Gossips say she is stroking more than George W’s ego during their weekends together at Camp David.” 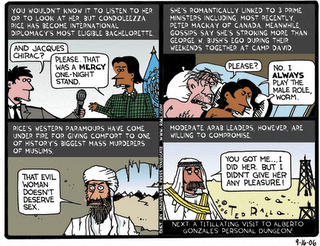 I thought I was immune to this type of disgusting innuendo after the years I’ve spent researching the far left. I have laughed out loud at the front page of The Globe obsessing about the relationship between President Bush and the First Lady while in the checkout line at the grocery store. I’ve cringed at the Wayne Madsen claims of the President’s sexuality and philandering. (as an aside, Madsen was one of the sources for the Globe’s story about the President and Condi). But to present this type of trash as an “editorial cartoon” is repugnant.

I realize the Clinton years may have numbed our senses when it comes to Presidential “affairs”. However to stoop to sordid venial attacks against President Bush and Secretary Rice is beyond contempt. Personal attacks and vile gossip doesn’t just hurt those depicted – there are families involved here also.

I thought Ted Rall had stooped to a new low when he compared our soldiers dying in the war on terror to the terrorist suicide bombers in his September 11 cartoon. I did not think he be any more disgusting. I was wrong.
Posted by Robin at 9:40 PM