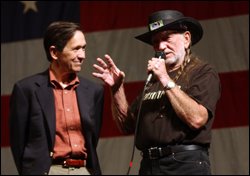 My momma always says "what goes around, comes around". I used to cringe when she said that but as I've grown up I realize that the statement comes true more often than not. Case in point, this news from Breitbart...

"Willie Nelson and several members of his band were issued misdemeanor citations for drug possession early today during a traffic stop in Saint Martin Parish. The traffic stop was conducted on Interstate 10 near Breaux Bridge.

Damn that karma thing sure can be a bitch! I guess we know which side of the legalized pot argument Kucinich is on.

The band members should have taken a hint from Toby Keith's song "Weed with Willie"...