More Outrage from the Religion of Peace

Yes the "religion of peace" is still outraged. And surprise, surprise some Muslims are calling for violence against the Pope in retaliation for using a quote about the less than benevolent intentions of Mohammed and Islam. 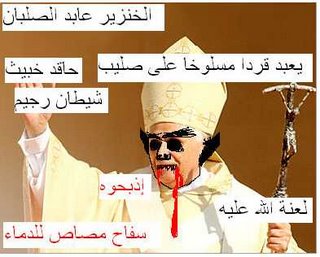 Attached is a picture of the Pope that is circulating in Qaeda-friendly chat rooms and websites. Lovely (and predictable) that they call for his beheading.
The script in red calls for the Pope's beheading. The rest of the translation:
"Swine and servant of the cross, worships a monkey on a cross, hateful evil man, stoned Satan, may Allah curse him, blood-sucking vampire."

Robert Spencer - the expert on Muslims & Jihad - over at Jihad Watch interprets some of the bizarre wording on the anti-Pope signs. "Mr. Pope be with in your limits"

I repeat what I said yesterday -

I salute the Pope for not tiptoeing around political correctness. It is a true picture of Islam when acts of barbarity, torture and murder are tolerated if committed in the name of Mohammed. Those concerned about the world's perception of Islam need to start speaking out about crimes against humanity committed by their brethren. Then and only then will the Muslim leaders have a right to complain about another person's statements.

Drudge has this headline up:

Oh yeah? I say let's take a page from the book of Marcellus from Pulp Fiction...