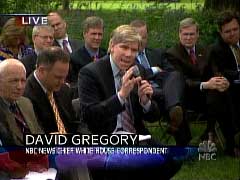 This is one press conference that I am truly sorry I missed today. From the clips I have seen and the transcripts I've read, THIS was the President Bush that led us through those dark days after September 11, 2001. I have not seen him this angry or determined since the day he stood on the rubble at Ground Zero and spoke through the bullhorn.

The President certainly did not need a bullhorn today. Today the President let the pansy liberals in the media know WHO was really in charge and WHO would be calling the shots. He threw out little digs here and there - he even got a good one in on the New York Times. If I was John McCain, I'd go into hiding for a while.

The BEST moment of the whole Press Conference was when Mr. Pompous Ass (aka David Gregory) stood up to and asked his question. Gregory's questions remind me of Joe Biden's questions - long on wind but short on substance. The President took off his hat and beat Gregory with it. By the time the President was finished with him, Gregory was slumped in his seat wallowing in his poopy pants. It was priceless.

Here's a sneak peek courtesy of Tim Graham over at Newsbusters...

President Bush..."Now, perhaps some in Congress don't think the program is important. That's fine. I don't know if they do or don't. I think it's vital, and I have the obligation to make sure that our professionals who I would ask to go conduct interrogations to find out what might be happening or who might be coming to this country, I got to give them the tools they need. And that is clear law.

Gregory (first interruption/follow-up): "But sir, this is an important point, and I think it depends --"

Bush: "The point I just made is the most important point."

You MUST watch this video of the President beating the crap outta Gregory all the way through. You will probably stand up and cheer at the end. I know I did...
Posted by Robin at 11:06 PM