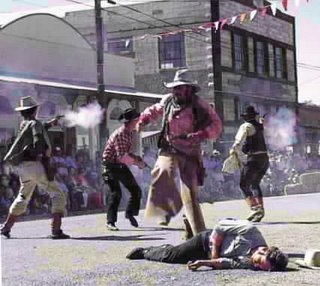 SCROLL FOR UPDATES:
*********************
The streets of Savannah GA looked like a scene from a Clint Eastwood spaghetti western Monday after 5 separate shootings left 2 people dead and injured a bystander in an 8 hour time span. As a home health nurse who has co-workers that see patients in these areas, it is downright scary. As a citizen of Savannah, it is appalling and completely out of control. Here's the run-down of Monday's Shoot-Out at the OK Corral in Savannah from the Savannah Morning News...

Shooting #1:
The two men were inside the Corner Mall at Martin Luther King Jr. Boulevard and Henry Street around 1:30 p.m. Monday when they started arguing, police said. The argument spilled outside the store, where the two men exchanged gunfire. Officers found Kurtz unresponsive at the scene. He was later pronounced dead.

Shooting #2:
Lee and Young were traveling south on Waters around 3:20 p.m. Monday when a white van pulled up behind their Nissan Pathfinder at a stoplight. The occupants in the van opened fire on the Pathfinder, police said. Police said Lee and Young fired back. At least 17 shots were exchanged, including one that grazed the scalp of Jessie Gordon, 64, who was sitting inside his Chevy Monte Carlo at the traffic light when a bullet went through his windshield.

Shooting #3:
But police are certain that drugs played a role in the shooting death of Ramone Bowers, 18, who was walking in the 300 block of Duffy Street around 8:30 p.m. Monday when a man approached and opened fire. Police found Bowers lying along the curb, suffering from several gunshot wounds. He also was found to have 70 rocks of crack cocaine in his rectum, Barnwell said. Bowers was taken to Memorial, where he was pronounced dead.
[I guess the 70 rocks of crack up his crack helped clue the police in to it being a drug related shooting - sheesh...]

Shooting #4:
Tony Hill, 21, was walking along Park Avenue when three men started walking with him. The group began arguing about turf when Gadson pulled out a gun, police said. Gadson fired twice, striking Hill once in the upper thigh, police said. Gadson and his two friends fled the scene, leaving Hill lying in the middle of the street. [I don't think they were arguing about the color of "astro-turf"]

Shooting #5:
Around 9:30 p.m. Albert Villarruel, 46, stopped at Gwinnett Street and Pennsylvania Avenue to check the air pressure in a tire, according to a police report. As he climbed out of his Ford Focus, a man approached and shot Villarreul in the back. Villarruel managed to climb back into his car and drive to his family's home in the 1900 block of Harrison Street to call police.

As of tonight, the police have only made 1 arrest in the shootings. They have ID'ed 3 men that were involved and are on the lookout for them. Here's a little bit of the background of the suspects...

Jawaun Lee , 19: wanted in Waters and Henry shooting and attack on officer. Arrested once in 2004 for drug sales. Lee has topped Chatham County's "most wanted" list since Sunday when he punched Advanced Patrol Officer Stephen Murphy in the face twice and then fled with the officer's Glock-45 semi-automatic handgun, police said.

Marquis O'Neal Young, 18: wanted in Waters and Henry shooting. No record as an adult, but was under supervision of the Department of Juvenile Justice

This is what having an interim police chief for almost a year, a mayor who is more interested in hearing "Calypso Louie" Fahrakann (I don't have the energy to look up the correct spelling of his name and frankly don't give a crap how he spells it) speak "truth to power" and a judicial system that is bogged down up to its axles and more interested in helping these poor young men get their lives back on track.

Oh yeah - our new police chief was just announced this past Friday. Hey Chief- welcome to Savannah. Hope you have the cajones to take care of business. Our lives are depending on it.

UPDATE:
Savh police have captured one of the suspects and he has a rap sheet as long as my arm - not to mention the crimes he has "allegedly" committed over the past week...

Police captured Marquis O'Neal Young, 18, early Wednesday morning. Police said Young is one of two suspects who exchanged gunfire Monday with occupants of a white van at the intersection of Waters Avenue and Henry Street, where both vehicles had stopped for a traffic light.

On Saturday, Young and three other men are accused of robbing three victims at gunpoint in the 3100 block of Abercorn Street, police said. They stole the Ford Taurus and later released two of the men. They kidnapped the third, driving around Savannah with the man in the trunk. Police eventually found the car abandoned on Cornwall Avenue, with the victim still locked in the trunk.

On Sunday, Young is accused of robbing a vendor in the 2400 block of Skidaway Road at gunpoint. Police said he fired several shots at the vendor before fleeing in the stolen Pathfinder with 20 pairs of jeans and a bag of tools.

Young also is charged with violating his probation related to crimes he committed as a juvenile.

I anxiously await his trial to see what kind of punishment he gets. It certainly won't be long enough. The way the courts in Savh have worked over the years he'll probably get about 10 years...

Here's an update about two of the other suspects still at large...
Jawaun Lee , 19: wanted in Waters and Henry shooting on Monday. Also wanted for punching police officer, stealing his gun and leading police on a chase from Waters Avenue to May Street. The chase ended when they crashed the vehicle into a church. Also carjacked a driver on Savannah's west side on Friday. Police consider Lee "extremely dangerous."

Sammy Lee Gadson Jr. , 21: wanted in Park and Abercorn shooting of a 21-year-old man Monday. Gadson is the son of a member of the Ricky Jivens gang, who is now serving 40 years in a federal prison.

The police have got to get these thugs off our streets. This has all the earmarks of another "Jivens" type gang setting up shop.

But the citizens have a responsibility also. These young men are out there and someone knows where they are. There is quite a history of citizens turning into Sgt. Schultz from "Hogan's Heroes" - they see "nothing" - and go on about their business. If the citizens don't start standing up and working to get these animals off our street it won't matter who the Police Chief is. I have not heard one peep of outrage from the black leaders in Savh either - but those who live here are far from surprised.