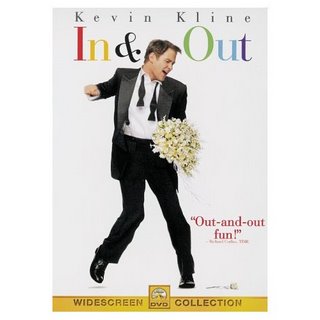 I feel like I just walked into the graduation speech scene in the Kevin Kline movie "In and Out". You know the one where everyone stands up and says they are gay in support of Kevin Kline's character.

I popped over to see what was happening at The Anchoress' place and got the shock of my life. She actually "outs" herself and admits that she loves sex. Well that has started a veritable out-lanche around the blogosphere. Not one to miss out on the fun, I thought it was time to get some things off my chest. Things that are SO shameful that I just hope I don't lose some good blogging buddies over it but here goes...

I saw every one of the "Billy Jack" movies - some more than once - and I liked them.

I love boxing and Nascar. My Dad was a boxer in his younger days and I grew up watching boxing. I'm a relative newbie to Nascar but after doing the Richard Petty Ride-A-Long at Daytona International Speedway, I was hooked.

I am an addict... A Diet Coke Addict.

My hair is not really red but it goes better with my temper. I have used the "n-word", the "f-word", the "s-word" and every other alphabet -word.

Last but not least and probably the most shameful thing....
I snort when I laugh too hard.

WHEW! I feel so much better now. I sure hope that I have some friends left after that. But it does feel good to come out of the closet.

But seriously folks... WHY is it necessary for homosexuals to always identify themselves as "gay"? It's not like others run around saying "I'm a Missionary Style Heterosexual That Likes It in the Dark" person. Your bedroom doesn't need to be on display in public. How many "Doggie Style Pride" parades do you see? I could truly care less what goes on behind closed doors as long as it doesn't involve children (or animals). I have friends from every walk of life, every different religion, background, sexual orientation, race etc. But I don't think of them like that. I see them as my friends. If you want to be judged on your merits, don't slap a label on yourself and walk around daring people to knock the chip off your shoulder. And stop trying to redefine the word marriage.

Other Coming Out...
The Anchoress - Outting myself…and whoever else wants outing!
Blue Crab Boulevard - All The Cool Kids Are Doing It
The Mad Tea Party - I'm Out
Posted by Robin at 10:18 PM