Murtha Admits That He Is A "Defeatocrat" 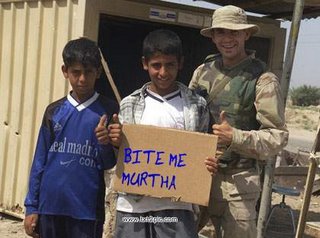 In today's Washington Post, Congressman John Murtha finally admitted that he IS a Defeatocrat. How refreshing that a Democrat is willing to go on record with his plans for a US defeat in Iraq. Utilizing the CodePink talking points and the MoveOn.org plan of US defeat, Murtha details why losing in Iraq would be a good thing...

We Democrats are determined to restore our nation's military strength, refocus on the real terrorist threat, bolster security safeguards at home and reestablish the credible standing we once had in the world. That is not defeatist. It is a call to formulate and execute a winning game plan for the War on Terror.

Who cares what the world thinks of us anymore. Our national security goes way beyond "making them like us". Sure, we need partners in the fight against terrorism. Sure it would be good to be "liked". But we've never really been liked until another country is in the midst of a disaster. Then they love us long time. And speaking of your "plan", what are the specifics? Your rhetoric is long on "plan" but short on "specifics".

Since entering Congress in 1974, I have always supported the president on issues of war.

Hold the phone...who was one of the loudest and most forceful voices in pushing for our withdrawal from Somalia? None other than Mr. Cut and Run. If Murtha had not been such a vocal opponent of finishing the job in Somalia, maybe the state of Islamofascist terrorism would be quite different.

Nevertheless, since our forces deployed to Iraq, Democratic support for the troops has never wavered.

I really don't see how supporting an organization that protests in front of Walter Reed Hospital carrying signs that say "Maimed for a Lie" is supporting the troops. In the real world, calling the soldiers "cold blooded killers" is not a signature support phrase.

The administration's "stay-the-course" strategy is not a plan for victory. It's not even a plan. All we have is a new military blueprint to keep 140,000 troops in Iraq through 2010.

And you know, as a former military man, that the "military blueprint" is just that - a blueprint. I would think that after all your bellyaching about President Bush not having a plan, you would be happy that the military has a plan based on a "worst case" scenario. You can't have it both ways - either they are planning ahead or they are not. Make up your mind what you want to oppose.

How about the 15 intelligence agencies that recently offered the opinion that this war has not made us safer? Are they all defeatists? Are they to be ignored?

You mean THIS NIE report? The one that said your cut and run policy would have nothing but negative effects on the war on terror?
"Should jihadists leaving Iraq perceive themselves, and be perceived, to have failed, we judge fewer fighters will be inspired to carry on the fight."
Maybe you should read the whole report and not just the selected portions leaked to the media or the CodePink interpretation of the NIE.

Will the White House toss the same tired insults at Sen. John W. Warner (Va.), the Republican chairman of the Senate Armed Services Committee, who has voiced concern over the situation in Iraq? Or at former secretary of state James A. Baker III when the commission he is co-chairing delivers its report on reassessing our options in Iraq?

Uh - HELLO? Ya gotta keep up with the times. Here's what President Bush said about Sen Warner and Mr. Baker's reports at his Press Conference this week...
And I appreciate Senator Warner going over there and taking a look. I want you to notice what he did say is, if the plan is now not working -- the plan that's in place isn't working, America needs to adjust. I completely agree...
And I appreciate Jimmy Baker willingness to -- he and Lee Hamilton are putting this -- have got a group they put together that I think was Congressman Wolf's suggestion -- or passing the law. We supported the idea. I think it's good to have some of our elder statesmen -- I hate to call Baker an elder statesmen -- but to go over there and take a look, and to come back and make recommendations. Somebody said he said, well, you know, cut-and-run isn't working. That's not our policy. Our policy is to help this country succeed, because I understand the stakes.
Any more questions on that topic?

Meanwhile, the radical Islamic cause wins more and more recruits.

Yeah, thanks to the tireless efforts of our media and the Defeatocrats, Islamofascists are empowered to keep fighting. The more weak-kneed we appear, the more the terrorists are emboldened.

Democrats are fighting a war on two fronts: One is combating the spin and intimidation that defines this administration. The other is fighting to change course, to do things better, to substitute smart, disciplined strategy for dogma and denial in Iraq.

And thanks to people like you, Mr. Murtha, the Bush Administration has to stop every few days to counter the lies and misstatements distributed by the Left when he should be focusing on our national security. The American people have been suckered in by people, like you, who have a political agenda. The fact that you are a proud member of CodePink completely undermines your credibility. The sooner you shut up and start doing the job you were placed in office to do, the sooner we can finish off the terrorists. Hopefully come November 7, we won't have to listen to you bloviating about how defeat would be good. Here's hoping that YOU get to experience the agony of defeat first hand. GO IREY!
Posted by Robin at 12:25 PM