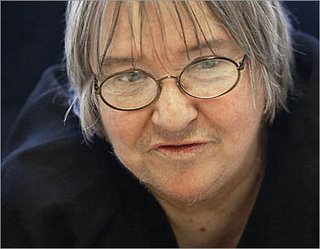 In a monumental travesty of justice, Judge Koeltl sentenced terrorist enabler and messenger Lynne Stewart to 28 months in jail. Imagine that 28 months for smuggling messages from the Blind Sheikh (who was in jail for his part in the first WTC bombing) to his fellow jihadists. She probably could have gotten an even lighter sentence if she had used the "oops they just fell into my socks" Sandy Berger defense.

Despite the fact that Stewart offered aid and comfort to an enemy of the United States, Judge Koeltl took other matters in consideration when determining Stewart's sentence...

Koeltl said she was guilty of smuggling messages between the sheik and his followers that could have "potentially lethal consequences.'' He called the crimes "extraordinarily severe criminal conduct.''
But he cited more than three decades of dedication to poor, disadvantaged and unpopular clients that had left her destitute even though she worked on more than 70 cases at once.
"Ms. Stewart performed a public service, not only to her clients but to the nation,'' Koeltl said.

I guess he used the Moussaui standard when sentencing Stewart. Stewart's pre-sentencing letter to the Judge contained a whopper of a lie...

In a letter to the sentencing judge, Stewart proclaimed: "I am not a traitor.''

Deny it all you want Lynne Stewart but you ARE a traitor. But her supporters see Stewart as a victim...

"It's not just Lynn Stewart who is a victim, it's the Bill of Rights that's the victim,'' said Al Dorfman, 72, a retired lawyer who was among the Stewart supporters standing outside.

Let's not forget that Stewart's "victory" is a win for George Soros' Open Society who coughed up the dough for Stewart's defense. So far Ramsey Clark, Stewart's close friend and Saddam Hussein lawyer, has not released a congratulatory statement. Cindy Sheehan is no doubt ecstatic that her modern day "Atticus Finch" will have such a brief sentence and will be free until appeals are completed.

All in all a great day for the terrorist supporters and a sad day for America's judicial system.

Read More over at StoptheACLU.
Photo courtesy of Sweetness & Light
Posted by Robin at 5:57 PM