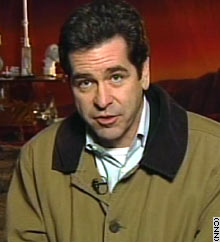 The smarmy CNN "journalist", Miles O'Brien, has crossed the line. In an effort to pander to the terrorist supporters watching CNN, O'Brien trashed the American contractors recently kidnapped in Iraq. From Scott Whitlock over at Newsbusters:

Miles O'Brien: "In southern Iraq, more now on the search for four American security contractors, one Austrian, feared kidnaped. It happened in Nasiriyah where Iraqi troops have taken control of security, but there's reason to believe the contractors were stopped at a checkpoint manned by insurgents masquerading as the authorities. 'American Morning's Ali Velshi is here to give us some perspective. The big picture, you know, we call them contractors. In another era, we would call them mercenaries."
Ali Velshi: "That's right, they are paid armed forces. There are different kind of contractors in, in Iraq right now."

Keep in mind that these men are VICTIMS and AMERICAN. They have family members and loved ones sitting on pins and needles waiting to hear about their status. The last thing the families need to hear is some big mouthed jerk spewing his latest KOS imitation on the network that airs terrorist propaganda.

Miles O'Brien must apologize immediately. CNN should apologize for the remarks of their "journalist". Remember all the people that have lost their jobs because CAIR deemed their comments offensive to Muslims? Well this American finds O'Brien and CNN offensive to MY COUNTRYMEN!
Posted by Robin at 2:26 PM