Will Janet Reno Be the Next Ramsey Clark? 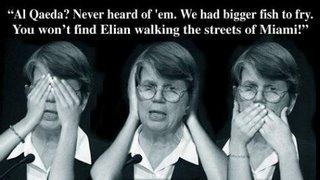 Lookie Here... Another former Clintonista pops up and demands rights for terrorists. From Breitbart News...

It was the first time that Reno, attorney general in the Clinton administration, has spoken out against the administration's policies on terrorism detainees, underscoring how contentious the court fight over the nation's new military commissions law has become. Former attorneys general rarely file court papers challenging administration policy.

Only the whacked out Leftist ones, like the former AG that is now Saddam Hussein's attorney - Ramsey Clark.

How many of these attorneys are members of the terrorist ass-kissin' Center for Constitutional Rights and the ACLU?

Janet Reno needs to go crawl back under that rock she's been hiding under and leave the fight against terrorism to the grownups. Maybe if Janet had actually done her job we wouldn't be fighting this war now.
Posted by Robin at 9:44 AM