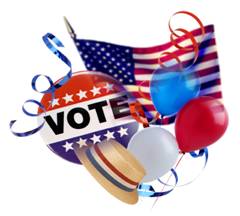 Everyone is hashing over the current polls, making predictions and reminding people to get out and vote. I thought long and hard about what kind of post I wanted for Election Day. Then I got the Stop the ACLU Election Newsletter and it had a link to this Election Day Prayer. I think it fits this election day more than ever...

O God, we acknowledge You today as Lord, not only of individuals, but of nations and governments.

We thank You for the privilege of being able to organize ourselves politically and of knowing that political loyalty does not mean disloyalty to You.

We thank You for Your law, which our Founding Fathers acknowledged and recognized as higher than any human law.

We thank You for the opportunity that this election year puts before us, to exercise our solemn duty not only to vote, but to influence countless others to vote and to vote correctly.

Lord, we pray that Your people may be awakened. Let them realize that while politics is not their salvation, their response to You requires that they be politically active.

Awaken Your people to know that they are not called to be a sect fleeing the world but rather a community of faith renewing the world.

Awaken Your people to a commitment to justice, to the sanctity of marriage and the family, to the dignity of each individual human life and to the truth that human rights begin when human lives begin and not one moment later.

Lord, we rejoice today that we are citizens of Your Kingdom.

May that make us all the more committed to being faithful citizens on earth.

We ask this through Jesus Christ our Lord. Amen.
Posted by Robin at 7:31 PM