GA's 12th District Race May Be Over But The Spotlight Remains 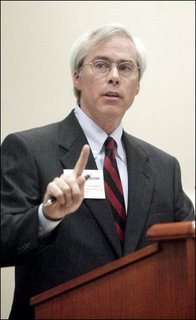 Max Burns conceded the race for the Georgia 12th District Congressional Seat yesterday after the vote totals were certified by the Sec. of State. Less than 900 votes separated Max and John Barrow, the Democratic incumbent. Barrow carried Richmond and Chatham County which gave him the edge. It's a shame - Max is a good honest man and served one term as the Rep for the 12th District. But Barrow won and it is over.

John Barrow may think his battle is over with Max Burns' concession. But believe me, it is only just beginning. Barrow campaigned more as a Conservative than a Democrat - even using "I agree with President Bush" in one of his ads. He ran ad after ad lying - yes flat out lying - about the Flat Tax that Max supported when he was in Congress. Even the Chairman of the Chatham County Democratic Party admitted the ads were "less than truthful".

I will support Barrow because he is my representative in Congress. But I will hold him accountable for every single campaign promise and pledge made during this race. I expect Barrow to represent the citizens just like he portrayed himself. When he doesn't, I'll be leading the charge to demand to know why.

Here are Barrow's "conservative" stance issues as portrayed during the campaign - straight from his re-election website...

Immigration - Secure our borders first and enforce the laws already on the books. Improve border security. Opposes amnesty in any form.

Energy - in favor of expanding America's investment in alternative energy like biofuel and ethanol.

Taxes - lowering taxes is a top priority. Supported the extension of the 2001 tax cuts and consistently voted against tax increases

Military/ War on Terror - deserve our total support and our unwavering commitment. Consistently voted to give our troops the resources they need on the battlefield and to give our intelligence agencies the help they need to stop terrorist attacks before they happen. Opposed an immediate troop withdrawal or an arbitrary timeline for withdrawal from Iraq. Supported the reauthorization of key provisions of the Patriot Act.

Ethics - supported the ethics reform bill passed by the House.

As long as your votes on the above issues fall in line with the stance you portrayed in your campaign, you will have my support Mr. Barrow. Deviate from your stance and you will hear about it. Do not attempt to pull another post election stunt like you did 2 years ago when you campaigned as a supporter of Same Sex Marriage and then voted against it. While I refuse to support same sex marriage, the fact that you broke your campaign promise is disturbing. You will not hide from scrutiny this time.

Oh yeah - expect to hear from me when you support any issue that goes against my morals and values. Your NARAL rating is distressing to say the least. I did not vote for you but I am one of your constituents. And this is one southern belle that is not afraid to speak up.
Posted by Robin at 9:36 PM