Schumer Sends Kerry To the Corner 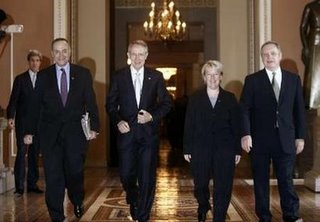 I completely missed this article from Tuesday. This is truly hysterical!

ABC's Z. Byron Wolf Reports: For anyone who needed more evidence that Sen. John Kerry (D-MA) is out of favor with Democrats, it appeared that Sen. Chuck Schumer (D-NY) kicked him out of the Democrats' leadership walk on Tuesday.

As the new Senate leaders departed from the Old Senate Chamber on their way to the Ohio Clock Corridor to talk about their agenda, the election of the leaders, and Iraq, John Kerry -- not a member of the new leadership -- walked out of the room behind new Majority Leader Harry Reid, Majority Whip Dick Durbin, Caucus Secretary Patty Murray and Caucus Vice-Chair Schumer. It is, after all, a public hallway in the Senate.

This reporter was standing with a scrum of journalists as Democrats left their caucus. It appeared that when Schumer noticed Kerry behind him, he turned around said something to Kerry.

We obviously don't know what Schumer said, but Kerry stopped in his tracks, watched the four Democratic leaders walk on without him, and when then he ducked between two of the marble statues in the hallway, which leads from the old Senate Chamber to the new Senate floor. Someone trying to project might say that Schumer had told Kerry to get the heck out of the leadership shot and Kerry, after digesting the request for a moment, did it.

This is what happens when you get an education, take a rice fanny grenade and then beat up on the true heroes.

John Kerry - relegated to the background among the statues. Perfect place for him.
Posted by Robin at 10:34 PM