Kucinich - An Embarrassment of Riches 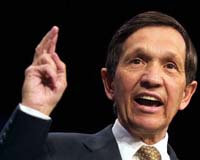 For all the problems in the GOP there is one thing that we can all be greatful for - Dennis Kucinich is NOT a member of the GOP. This Congressman has consistently battled against our national security and our military. Kucinich's latest plan to get the troops out of Iraq and give the terrorists another reason to claim victory against the infidels (aka the United States) - cut the funding for the war. I kid you not - he wants to cut the funding for the war. Well at least its the first true "plan" to come from the Left. Here's what Kucinich said during his Democracy Now interview...

"I want to say that there's one solution here, and it's not to engage in a debate with the President, who has taken us down a path of disaster in Iraq, but it's for Congress to assume the full power that it has under the Constitution to cut off funds. We don't need to keep indulging in this debate about what to do, because as long as we keep temporizing, the situation gets worse in Iraq.

"We have to determine that the time has come to cut off funds. There’s enough money in the pipeline to achieve the orderly withdrawal that Senator McGovern is talking about. But cut off funds, we must. That's the ultimate power of the Congress, the power of the purse. That's how we'll end this war, and that’s the only way we’re going to end this war."

It just boggles my mind how Americans could actually elect this bozo to Congress. But for anyone that actually follows politics, Kucinich's blathering is not new. He's been flapping his gums on the "disaster in Iraq" since the first boom of Shock and Awe. Kucinich doesn't really even believe there is a war on terror. This is from a speech called "Creating Peace" on July 18, 2006...

"The fight against terrorism in the 21st century is beginning to have the feel of the fight against communism in the 20th century, conjuring of enemies, scapegoating, and wanton destruction. Our war on terror has become a war of error, so we blame the exercise, our capacity for warmaking. And because we have not yet begun to explore our capacity for peacemaking, we are reduced to a predatory voyeurism, once making war, watching war, being aghast at war, impotent to stop our own creation."

Mission- The Department shall--
(1) hold peace as an organizing principle, coordinating service to every level of American society;
(2) endeavor to promote justice and democratic principles to expand human rights;
(3) strengthen nonmilitary means of peacemaking;
(4) promote the development of human potential;
(5) work to create peace, prevent violence, divert from armed conflict, use field-tested programs, and develop new structures in nonviolent dispute resolution;
(6) take a proactive, strategic approach in the development of policies that promote national and international conflict prevention, nonviolent intervention, mediation, peaceful resolution of conflict, and structured mediation of conflict;
(7) address matters both domestic and international in scope; and
(8) encourage the development of initiatives from local communities, religious groups, and nongovernmental organizations.

Sounds beautiful, huh? Do you really think that OBL and Zawahiri would sit down around a campfire and participate in conflict mediation? I think Dennis has been spending too much time with Willie "pothead" Nelson.

The next time you hear Kucinich bloviate about protecting the Constitution remember that he violates the Constitution every day by participating in the Progressive Caucus. All in plain sight of the media and with the approval of voters.
Posted by Robin at 9:28 PM