Danes Offer Up a Little Payback

Who knew that the Danes had such a sense of humor? I have to admit my initial reaction to the ad was "what gives?"... then I read the article about the "hidden message". Hat tip Little Green Footballs... 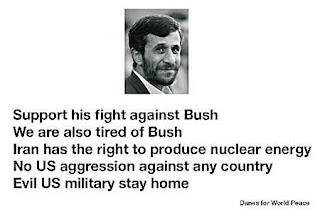 COPENHAGEN (Reuters) - A Danish art group that pokes fun at world leaders targeted Iranian President Mahmoud Ahmadinejad on Wednesday by placing an advertisement in a Tehran newspaper with an insulting hidden message.

Beneath a picture of the president, a series of apparently sympathetic statements were arranged such as "Support his fight against Bush" and "Iran has the right to produce nuclear energy". The advert was attributed to "Danes for World Peace".

However, the first letters of each phrase, when read from top to bottom, spell out "S-W-I-N-E".

How embarrassing - the Tehran Times actually published the ad. The staff at the Tehran Times better hightail it outta the country cause I don't think Allmyjihad has much of a sense of humor. You gotta love it though...