Snarking the First Lady When She Has Cancer

The always elegant and gracious First Lady has been diagnosed with skin cancer. First Lady Laura Bush had a squamous cell carcinoma removed from her lower leg in November. Thankfully this is one of the "mild" forms of skin cancer, unlike malignant melanoma.

First lady Laura Bush had a skin cancer tumor removed from her right shin in early November. The procedure was not disclosed until Monday night. The cancer was identified as a squamous cell carcinoma, a malignant tumor that is the second most common form of skin cancer.

The first lady was noted wearing a bandage on her right leg before the election. At the time Whitson said Mrs. Bush had a sore on her shin. In late October, Mrs. Bush had a biopsy because the sore was not healing, Whitson said, and it was determined to be a squamous cell carcinoma.

When I read this I immediately recalled a snarky post on the Net mocking the "bruise" on the First Lady's leg complete with pictures. Of course it came from the vile Wayne Madsen who is obsessed with the marriage of The President and the First Lady... 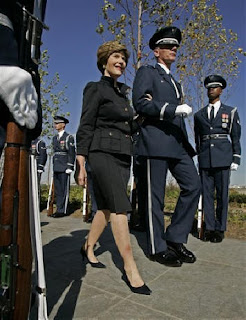 Laura Bush was sporting a painful looking bruise on her shin during the dedication of the world's largest coat rack in Arlington, Virginia on Saturday. Perhaps the staff at the Mayflower Hotel in Washington forgot to tell her that they moved the coffee table in the presidential suite. 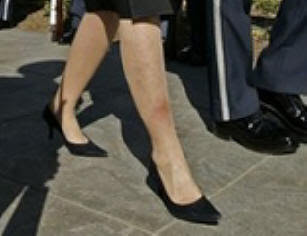 This was just a continuation of Madsen's little Bush-Condi gossip-mongering spree. I guess Madsen had to justify his reports to the tabloid The Globe about the Bush marriage.

Madsen should be ashamed that he mocked the First Lady's "injury" only to find out it was cancer. He's probably getting an apology ready to post on his website...

Wait a minute - we're talking Wayne Madsen here. You know the same person that broke the news of Israeli Chemical weapons that were in actuality nothing more than mine clearing devices. He'll find some way to spin this into another great Rovian conspiracy- probably Laura was injected with cancer cells while she was sleeping by a jealous Condi or evil George so they could get rid of her and ride off in the sunset together... Let's see how long it is before someone as DU or KOS comes up with that fairy tale...
Posted by Robin at 10:20 AM