And THIS is Honoring the Soldiers on Memorial Day?

Some on the left are complaining that yesterday's Day by Day Cartoon wasn't really a Memorial Day salute but more of a media bash with old facts. Actually the fact that the good news from Iraq is still not being reported IS appropriate to bring up when talking about Memorial Day. After all, the soldiers who gave the ultimate sacrifice in Iraq are dishonored everytime the media goes into "if it bleeds, it leads" mode instead of balanced reporting.

Then I find this report about how Iraq Veterans Against the War and their comrades at Code Pink and Veterans for Peace saluted the soldiers on this Memorial Day weekend. 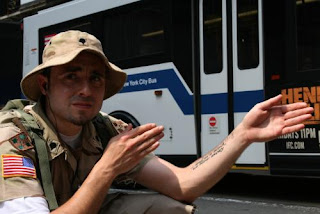 "Today members of Iraq Veterans Against the War (IVAW) staged simulation military operations throughout the New York City area to give fellow Americans a glimpse of the day-to-day realities of the Iraq War." 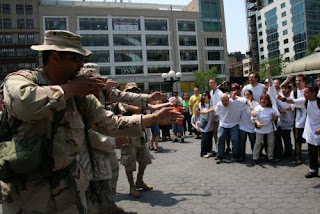 "Wearing camouflage fatigues and pointing imaginary guns, a half-dozen veterans subdued a crowd of anti-war protesters playing Iraqi civilians, throwing some of them roughly to the ground and handcuffing them."

Ummm... and this is supporting the troops how?? If they wanted reality, they should have had some Kaffiyah clad "civilians" pretend shooting at the soldiers and hiding behind the "innocent women and children". How about a simulated beheading? An added touch would have been to drag some mannequins behind moving vehicles. Instead these vets decided to show how American soldiers "terrorizing" civilians. Nice try but it just reveals that this was nothing more than a publicity stunt to gin up more anti-war sentiment. It had absolutely nothing to do with saluting the troops - it was simply propaganda.

It is interesting to note that Adam Kokesh who is already under investigation by the Marines for wearing his uniform at protests and telling a superior officer to "go F#*$& himself", participated in this street theater. He just added more evidence to the Marines' case...

Kokesh also wins the award for the most stupid statement of the day...

"By Bush logic to support the troops means to fund the mission," said Adam Kokesh, 25, of Washington, D.C., who served in Iraq with the Marine Corps in 2004. "But the more the troops are funded, the more of them are going to die."

Cutting off funds to the soldiers in the middle of war is support? Talk about screwed up priorities... but we should expect nothing less from the group that has undermined support for their own brothers. Shameful and Disgusting.
Posted by Robin at 9:29 AM