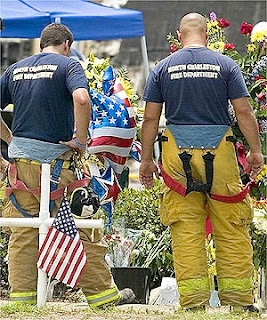 It's a sad day. Nine firefighters in Charleston South Carolina were killed in a fire at Sofa Warehouse last night.

I am the wife of a 38 year veteran of the Savannah Fire Department who retired 4 years ago. Whenever he was on duty, I could count on a phone call right before bedtime. If he didn't call by a certain time, I would flip on the local news to see if there was a fire. Many a night we'd be in the middle of a conversation when the alarm would go off. We both paused to hear which Engine Co was being called. When I heard #6 called, my heart would skip a beat or two. I always told him how much I loved him before we quickly ended the call. I said a prayer asking God to keep him safe. We always joked that he was "saving lives and property" when he worked but it was the truth.

Now 9 families are experiencing the nightmare that I feared and it breaks my heart. Here is a list of the firefighters that gave their lives to save others:

Tallied up these heroes had 100 years of service. And they will be sorely missed by their friends, families and coworkers.

If you would like to contribute to a fund set up for the families of the lost firefighters, you can send donations here: