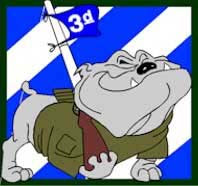 Operation Marne Torch is underway in Iraq. This operation is being conducted by the soldiers of the 2nd Brigade, 3rd Infantry Division from Ft. Stewart GA. From CentCom...

FOB Kalsu, Iraq - Fixed-wing aircraft dropped four precision-guided bombs on targeted sites preventing insurgents from entering southern Baghdad June 16. This was the beginning of a major offensive operation dubbed Marne Torch.
The aircraft supported approximately 1,200 2nd Brigade Combat Team, 3rd Infantry Division Soldiers who are focused on the security belts surrounding Baghdad.
2nd Brigade Soldiers have the mission of defeating insurgentactivity, denying the enemy sanctuary and preventing terrorist elements from moving accelerants from the Arab Jabour area into Baghdad.
The brigade's efforts in Arab Jabour are part of the largeroperation recently announced by Secretary of Defense Robert M. Gates and Gen. David Petraeus, Multi-National-Force commander.
"Our Soldiers are well trained, and I am extremely proud of the work they have accomplished over the past several weeks in preparation for this operation," said Col. James Adams, 2nd BCT Deputy Commanding Officer.
Marne Torch is named for the historical British-Americaninvasion of French North Africa in World War II that took place in 1942.
Soldiers from the 3rd Infantry Division fought alongside its British comrades, and at a modest cost, gave the Allies substantial beachheads in North Africa.

Ft. Stewart is right here in my area so I'll be watching out for news on Operation Marne Torch.

BTW you know how the media loves to publish military recruiting numbers when they take a dip - here's a counter for those cherry picked reports. From MG Rick Lynch, Commanding General 3rd ID...

In Baghdad, Thursday, I presided over a re-enlistment ceremony for more than 50 Soldiers. It was the 232nd birthday of our Army. There was no better way to celebrate than to focus on the commitment of the people that fill our ranks.

You can read more about Ft. Stewart, the 3rd ID, the Dog Faced Soldiers and the Rock of the Marne here...

Another interesting tidbit - the 3rd ID is the same division that Kevin Benderman refused to deploy with a couple of years ago. Benderman claimed CO status but I still believe he was just too yellow to be a dog faced soldier. IVAW member Pvt Marc Train is another chicken from the 3rd ID. Train is currently AWOL but participates in IVAW activities and publishes articles on their website.
Posted by Robin at 5:44 PM