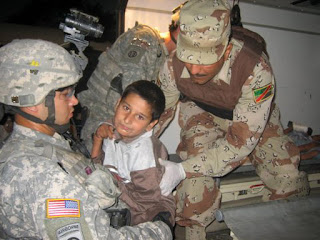 Our soldiers are without a doubt some of the most compassionate people in the world. It amazes me how in the middle of a war zone the US Military will drop everything to rescue children. It's rare to see it reported in the media that's why this story about our soldiers rescuing abused special needs children from an orphanage in Iraq over at CBS News brought tears to my eyes...

They saw multiple bodies laying on the floor of the facility," Staff Sgt. Mitchell Gibson of the 82nd Airborne Division told CBS News chief foreign correspondent Lara Logan. "They thought they were all dead, so they threw a basketball (to) try and get some attention, and actually one of the kids lifted up there head, tilted it over and just looked and then went back down. And they said, 'oh, they're alive' and so they went into the building.”

Inside the building, a government-run orphanage for special needs children, the soldiers found emaciated little bodies tied to the cribs, CBS News reports exclusively. They had been kept this way for more than a month, according to the soldiers called in to rescue the dying boys. "I saw children that you could see literally every bone in their body that were so skinny, they had no energy to move whatsoever, no expression on their face,” Staff Sgt. Michael Beal said.

It didn't stop there. The soldiers found kitchen shelves packed with food and in the stock room, rows of brand-new clothing still in their plastic wrapping. Instead of giving it to the boys, the soldiers believe it was being sold to local markets.

My first thought when I walked in there was shock and then I got a little angry that they were treating kids like that, then that's when everybody just started getting upset," Capt. Jim Cook said. "There were people crying. It was definitely a bad emotional scene."

Another little boy right shown in the photos was carried out of the orphanage by Beal. He was very emaciated. "I picked him up and then immediately the kid started smiling, and as I got a little bit closer to the ambulance he just started laughing. It was almost like he completely understood what was going on," Beal said

Later at the hospital, Lt. Jason Smith brushed teeth and helped clean up the boys. He and his wife are both special education teachers and he was proud to tell her what the soldiers had done. "She said that one day was worth my entire deployment," Smith said. "It makes the whole thing worthwhile."

The video is here but it's not for those with a weak stomach - make sure you have a couple of tissues handy. Watching the soldiers interact with the children and seeing the children's response is completely overwhelming.

The next time you hear the media or some left wing pundit bashing our soldiers, send them a copy of this story with the pictures. Then tell them to shut up.

God Bless our military men and women.
Posted by Robin at 6:44 PM