More and more evidence from the Haditha incident is coming to light thanks to the Article 32 hearings. Every piece of newly revealed evidence makes me wonder why there are any hearings for these Marines. It also hammers home the fact that these heroes have been victimized for political gain.

For almost 2 years we've been inundated with the tales of the 24 "innocent civilians" and the "rampaging Marines". Minimal, if any, space has been used to give us the BIG picture of Haditha on November 19, 2005. Now thank to Nat Helms and Defend Our Marines, we get a riveting, edge of your seat glimpse of what was happening in Haditha that day. Here's a snippet from Firefight in Haditha: An Eyewitness Account...

There were so many weapons firing Haman (Former Corporal Joe Haman) couldn’t distinguish between the sharp cracking of the enemy’s AK-47 assault rifles, their Russian-designed RPD light machine guns, and the faster popping of the M-16s and ripping roar of the Marines’ Squad Automatic Weapons - called SAWs, he said. All Haman could hear was the loud, sustained roar of gunfire and grenade explosions, the signature of an ambush, he said.

A few minutes after the Iraqi bomb exploded the first dreaded radio message went out from Wuterich’s position reporting a casualty, Haman said. Every Marine in Iraq is assigned a number used to identify them to higher headquarters in case they are killed, wounded, or captured. Haman didn’t know who the Marine was, but he knew Marines were down, he recalled.

“Somebody said his [Terrazas] number, but we didn’t know who it was. We just knew somebody had been killed or wounded,” Haman said.

About 30 minutes before Haman’s squad was called into action, he said. Meanwhile the sounds of battle ebbed and flowed when Wuterich’s squad fighting 600 meters away counter-attacked. Orbiting helicopters and ground commanders filled the airwaves with urgent messages. The Marines in the C.O.P. were anxious to get into the fight. They couldn’t understand what the delay was all about, Haman said.

Then a nearby helicopter reported to headquarters that a large group of insurgents were fleeing out the back of the small cluster of houses now under counter-attack by Wuterich’s squad. The pilot spotted the insurgents when they abandoned the houses where the civilians died, Haman said.

The pilot reported that some of the insurgents had peeled off from main body and fled into another house situated by a palm grove about 100 or 200 meters south of where Wuterich was engaged, Haman says.

A word of warning before reading the article - if you smoke make sure you have several cigarettes handy cause this will make you chain smoke. Helms is just masterful at setting the scene.

Helms followed up with a Part II that has set the supporters of the Haditha Marines on fire. Yes Virginia there is eyewitness testimony of weapons from the white car and NCIS never turned over the testimony...

Joshua Cash Karlen, 23, from Westminster, Colorado, said Monday that he is positive he saw the weapons while he was being evacuated from the battlefield. The following spring Karlen says he reported his observations to NCIS investigators while being interrogated by two special agents.

“They grilled me over why I was there, why I was driving through the cordon and what I saw,” Karlen said. “I was in there for about four hours.”

Karlen says he repeatedly told the two agents what he witnessed at the ambush site.

“The area was cordoned off when we drove by,” Karlen said in a telephone interview from his home. “I was hit by a grenade and had a severe concussion so I had to be evacuated out. I was on the south side of Chestnut (code name for the road running on the south side of the ambush site) being driven through the cordon. We were going real slow so I could see a white car, a pile of bodies, and weapons piled against the car. There were three or four AKs stacked leaning against a white car and some Marines were standing around. ”

Despite a lengthy interview Karlen’s statement was never included in the evidence obtained by the defense, according to defense attorney Brian Rooney. The former Marine Corps Staff Judge Advocate represents Lt. Col Jeffrey Chessani. Chessani is the former commander of 3rd Battalion, 1st Marines. Chessani is currently waiting to discover if he will stand general courts-martial over his role in Kilo’s alleged murder rampage.

For months I've had a nagging thought about one of the photos the Washington Post published along with cherry picked anti-Marine excerpts of the leaked NCIS report on the Haditha investigation. The photo shows the bodies of the 5 men from the white car at the scene of the IED explosion. Elements of the photo appeared blurred out - so much so that one of the bodies has no legs below the knee. The same body has something wrapped around his wrist along with something in his grasp.

I finally posted on my questions over at FreeRepublic last night and others expressed the same questions. Here's a zoom of the picture. See for yourself... 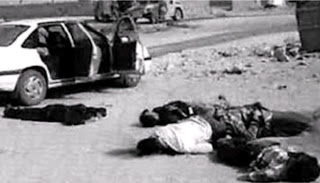 You can see the "un-zoomed" photo over here at FreeRepublic.

Based on the information coming to light, I think someone got a little creative with "touching up" the photo. Do we have another case of Fauxtography?
Posted by Robin at 8:41 PM