Where Are the Cries for Justice for Officer Mark Allan McPhail? - UPDATED Pardon and Parole Board Delays Justice 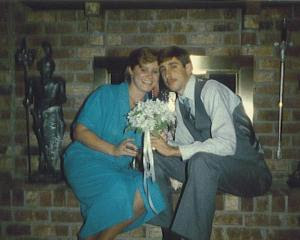 There is even a template of a letter you can email to the Pardon and Parole Board urging them to follow the jury's decision...

I respectfully urge the Board of Pardons and Paroles to make good on the commitment to uphold the law. Would you consider the feelings of Troy Anthony Davis’ victims, including Mark McPhail’s widow and children? Would you allow his mother and the rest of his family and fellow police officers, to get on with their lives? After 18 years, they’ve all been through enough. We urge you to uphold your commitment to fairness and justice and complete the death sentence of Troy Anthony Davis that was ordered by the Court in 1991. Davis has exhausted his appeals. Let us put this permanently to rest for the sake of Mark McPhail’s memory and all those involved.

Thanks Cao for getting this story out to a wider audience.

And for those wondering why I am so involved with this case... The brother of Officer McPhail's widow is my son's godfather. I remember this case like it was yesterday. There was no rush to judgment. There was no frame-up by the Savannah PD. And believe me - it WAS a jury of Davis' peers that heard ALL the evidence and returned a verdict of guilty with the penalty of death.
***************
UPDATE 7/16/07 1040pm... Well the Pardon and Parole Board has taken it upon themselves to deny justice to Officer McPhail. From the Savannah Morning News...

Troy Anthony Davis on Monday won "up to a 90-day stay'' of execution in the 1989 murder of Savannah police officer Mark Allen MacPhail.

The five-member state Board of Pardons and Paroles action postponed a 7 p.m. Tuesday date with lethal injection for Davis, 38.

Board spokeswoman Sheree Lipsomb said the board took the action to allow members time to "evaluate and analyze the evidence presented before the board'' Monday.

As if 18 years has not been enough. Shame on the Board for bowing to political pressure from special interest groups. My heart goes out to the McPhail family for having to endure yet another delay in their quest for justice...

***************
The anti-death penalty crowd is all adither over the pending execution of Troy Anthony Davis in GA. Davis was convicted in the 1989 murder of Police Officer Mark Allan McPhail. McPhail was working security at the Burger King at the Greyhound Bus Station in Savannah when he was murdered in cold blood.

Amnesty International has taken up Davis' case as its latest cause du jour. You can even go to AI's website and send a prewritten letter to the Board of Pardons and Parole that closes with the following pukefied statement...

I respectfully urge the Board of Pardons and Paroles to demonstrate your strong commitment to fairness and justice and commute the death sentence of Troy Anthony Davis.

AI advises that if you write your own letter, just make sure you...
"explaining that you are not seeking to condone the murder of Officer Mark Allen McPhail, or to downplay the seriousness of the crime or the suffering caused"

Doing a Google search for Troy Davis + murder yields 775,000 hits while a Google search for his victim, Mark Allan McPhail + murder returns less than 100,000 hits and most of those are calls for clemency for Davis. There are cries for justice for Davis from Rep John Lewis, BET, World Prout Assembly, The Pacifica Foundation and even a blogger at Daily Kos. Most articles play up the white police officer versus black man convicted race card.

The Savannah Morning News did a "cry me a river" piece about how Davis was a kind, prayerful young man. Reading over the list, it sounds as if he should be canonized along with receiving clemency...

"remembers how he left Windsor Forest High School to care for a paralyzed sister while his mother worked...
And how he spent his own money so neighborhood kids could have ice cream on a hot summer day...
...recalled how her son worked, then cashed his check and left $80 on her dresser each payday to help pay for groceries.
Or how he could be counted on to do his chores each weekend."

So what exactly did Troy Davis do (according to a jury of his peers). Here's what the court transcripts say...

In response to the disturbance in the parking lot, Officer McPhail, who was working as a security guard at the restaurant, walked rapidly from behind the bus station, with his nightstick in his hand and ordered the three men to halt. (T. 849). Mr. Collins and Davis fled, and Officer McPhail ran past Sylvester Coles in pursuit of Davis. (T. 851). Davis looked over his shoulder, and when the officer was five to six feet away, shot him. Officer McPhail fell to the ground, and Davis walked towards him and shot him again while he was on the ground. (T. 850). One eyewitness testified that Davis was smiling at the time. (T. 851). The victim died of gunshot wounds before help arrived.

An autopsy revealed that Officer McPhail was shot twice. One bullet entered the corner of his cheekbone on the left side and exited the back of his neck; the bullet blew away bits of his teeth, and his lip was impaled on his teeth. (T. 782-784). The second bullet passed through the armhole of McPhail’s bullet-proof vest, and entered his chest on the left side. (T. 784). This bullet pierced the lung and the aorta, and lodged in the opposite side between the third and fourth vertebrae, at the back of the chest cavity near the spinal column. (T. 784-787). The cause of the victim’s death was a loss of blood from a gunshot wound to the left side of his chest. (T. 789). The pathologist further noted that there were scrapes and lacerations on the victim’s arms and legs, and an apparent injury to his right thigh, which could have been grazed by a bullet. (T. 788-789).

If that isn't graphic enough, how about what Mark McPhail's Mom is forced to remember day after day?

"The picture I cannot get out of my head ... it was when Mark was on the ground," Anneliese MacPhail, 73, said during a brief conversation with The Atlanta Journal-Constitution. "He shot him in the face."

What about McPhail's widow?

"He was my best friend," Joan MacPhail said. "Who'd a thought we would get married?"

Or this from her victim impact statement which Joan was not allowed to read in court...
"I not only have to contend with my own grief, but also that of a 3-year-old child," Joan MacPhail wrote. "It has taken my daughter over a year to start grieving. She has vivid memories of her father. It takes at least one hour to get my daughter to sleep and then it is not all night."

McPhail's son was only 7 weeks old at the time of his murder so there are no statements about how he handled the loss of his Daddy.

If you want to read the FACTS about the case, including testimony straight from the transcripts, you can go here. Contrary to what the supporters of Davis claim, there is evidence tying him to 3 separate shooting/assault scenes that same night. Davis fled to Atlanta and was not caught until August 23-4 days after the murder (which might explain the lack of gunpowder residue on his body and the failure to find the murder weapon). Oh BTW - Davis admitted to being at the scene of the murder too.

So while Amnesty International publishes articles like "Where is the Justice for Me?" in support of Troy Davis, I say "Where is the justice for Mark Allan McPhail?" It's been 18 years since Officer Mark Allan McPhail was brutally murdered. His family has been snatched through hell with every appeal and every media report of support for Davis. Tuesday night at 7pm maybe the McPhails will experience at least a brief moment of peace.
(The picture above is of Joan and Mark McPhail on their wedding day)
Posted by Robin at 9:44 PM

The Troy Davis campaign (1), like many before it (2), is a simple, blatant fraud, easily uncovered by the most basic of fact checking (1).

The case for Davis' guilt is overwhelming, just as were his due process protections, which may have surpassed that of all but a few death row inmates.

" . . . Mr. Davis is not innocent: the evidence produced at the hearing on the merits of Mr. Davis's claim of actual innocence and a complete review of the record in this case does not require the reversal of the jury's judgment that Troy Anthony Davis murdered City of Savannah Police Officer Mark Allen MacPhail on August 19, 1989." (3)

"Ultimately, while Mr. Davis's new evidence casts some additional, minimal doubt on his conviction, it is largely smoke and mirrors." (3)

"As a body, this evidence does not change the balance of proof that was presented at Mr. Davis's trial."(3)

"The vast majority of the evidence at trial remains intact, and the new evidence is largely not credible or lacking in probative value." (3)

None of this came as a surprise to anyone who actually followed the case, in contrast to the Save Troy Davis folks who were, willingly, duped.

2) "Innocence Hearing", ordered by the US Supreme Court, US DISTRICT COURT, in the SOUTHERN DISTRICT OF GEORGIA, SAVANNAH DIV.,RE TROY ANTHONY DAVIS, CASE NO. CV409-130http://multimedia.savannahnow.com/media/pdfs/DavisRuling082410.pdf

Victim's Voices - These are the murder victims
http://www.murdervictims.com/Voices/voices.html