Things appear to be taking a turn for the worse for Michael Vick. According to CNN...

Two men who initially pleaded not guilty to running an illegal dog fighting ring with NFL quarterback Michael Vick are set to appear in court later this week for new plea hearings, a sign they may be changing their plea.

Thursday should give us a clearer picture but in the meantime here's a pic to keep you entertained. 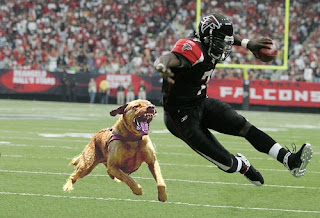