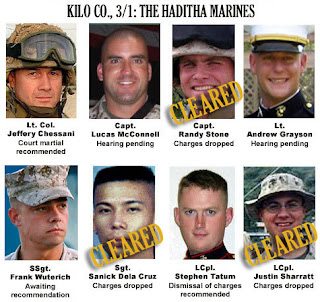 Great News from Camp Pendleton today. All charges have been dropped against Capt. Lucas McConnell in the Haditha incident.

Charges against Capt. Lucas M. McConnell stemming from the command response to the death of Iraqi civilians in Haditha, Iraq on Nov. 19, 2005, were dismissed on Sept. 12, 2007. A Grant of Immunity and Order to Cooperate with All Parties were issued to McConnell in order to further the fact finding process into the incident.

McConnell was the Commanding Officer of Company K, 3rd Battalion, 1st Marine Regiment, at the time of the incident.

Lt. Gen. Mattis determined that administrative measures are the appropriate response for any errors or omissions allegedly committed by McConnell. This determination is based upon a thorough consideration of information developed from rigorous investigations by Marine, Army, and Naval Criminal Investigative Service investigators, as well as evidence produced in previous Article 32 hearings relating to the Haditha incident.

Meanwhile Murtha cuts and runs from someone asking if he was going to apologize. First he lies and says the hearings are still going on. Then he asks the young man if he has ever served prior to launching into his own military credentials.

So far JAG and NCIS are batting 0.00 and Murtha is still a lying ass.

UPDATE 9/20/07:
My good friend Jonn over at This Ain't Hell has one of the best smackdowns of Murtha that I have yet to read. Here's a snip...

John Murtha is no Marine. He climbs over the bodies of fallen marines to call attention to himself - for the anti-war movement. He has learned that the anti-war movement insulates him from Congressional investigations for his double and dirty-dealings in his district which enrich him and his family. A real Marine wouldn’t use a fallen or troubled comrade to improve his own condition. Real Marines jump on grenades to shield their friends from the blast.