Iraq Veterans Against the War (IVAW) have started their "truth in recruiting" campaign to hopefully prevent others from signing up to serve in the US Military. It's another one of their "we wanna live in the 70's" attempts to revive the anti-Vietnam War actions. Here's how Mike Ferner describes the first morning...

In the early morning chill of September 17, on the plaza in front of Union Station, members of IVAW set out literature and donuts on a card table and waited for the young International A.N.S.W.E.R. Coalition activists to arrive. After a briefing, four-person teams left for various military recruiting offices and the campaign was underway. In addition to handing flyers to people walking into recruiting offices, the effort includes “Befriend a Recruiter,” a tactic intended to waste as much of a recruiter’s time as possible by talking with youth who have no intention of joining the military.

But the Gathering of Eagles caused a little uproar by counter-protesting the little ANSWER lemmings at a Recruiting Office in DC. The poor little darlings had to call for reinforcements...

Within minutes, the teams at an Armed Forces Recruiting Station in the northwest quarter of the District called back to the IVAW post with a report that volunteers were being hassled by “Gathering of Eagles” members – in town to dog peace activists throughout a busy week of activities in the nation’s capital. IVAW members Adam Kokesh and Mark Train, and Veterans For Peace (VFP) member Leah Bolger jumped into Kokesh’s aged Ford Bronco to offer assistance.

One of the female members of GOE had a chance to talk to Adam Kokesh, the poster boy for the IVAW.

A few minutes later she was in conversation with IVAW board member, Adam Kokesh. “I respect you. I can see in your eyes you are good. But I also see much hurt and disappointment. I’m glad you served. I’m just sorry that whatever happened to you made you feel like this. But while you’re doing this you’re breaking the morale of our soldiers. It’s hard for me but I try to be kind. Didn’t Cindy Sheehan’s words have a bad effect on you?”

“Cindy Sheehan had no effect on my morale,” the former Marine replied. “My morale was low because we couldn’t get the equipment we needed.”

Strange comment coming from Kokesh. That's not one of his typical excuses. I looked back through his articles and speeches but couldn't find any mention of equipment issues in his list of complaints. But I did find this in Kokesh's IVAW bio...

Don’t get me wrong though, I had a great experience, and I’ll never regret volunteering for a second.
After completing my degree I volunteered for another tour but ended up at Camp Pendleton managing a barracks for most of 2006.

HUH? He was so distressed while serving in Iraq that he volunteered for another tour? Now that just doesn't make sense but what does when talking about IVAW? But he left out the part about the role his non-judicial punishment (for purchasing a pistol from an Iraqi policeman and bringing it home as a souvenir) and rank reduction to Corporal played in his not being allowed to serve a second tour of duty in Iraq.

Also found this little quote from Kokesh when he was battling the Marine Corps over wearing his uniform while participating in war protest activities....

I love the Marine Corps, and to see it abused for political ends makes me sick. You should all be ashamed to call yourselves Marines.

Yoo-Hoo - Mr. Pot meet Mrs. Kettle. WHO is using the Marine Corps for political ends? Maybe Kokesh should take a look in the mirror when he's marching in an anti-war protest wearing his uniform while carrying an upside down American Flag.

Here's a picture of Kokesh while he served in Iraq. Looks like he's got the full complement of equipment and even some flowers from Iraqi children. 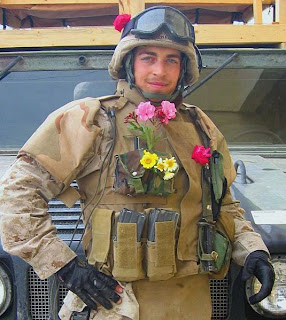 One little tidbit from the Ferner article... Mark Train is mentioned as hoping in the car to go defend the ANSWER communists in training. One problem though - Mark Train is supposed to be confined to the base at Ft. Stewart GA awaiting his punishment for going AWOL.
Posted by Robin at 10:35 PM