There are not enough words to express my gratitude and appreciation to Nathaniel Helms and David Allender for all the investigative work they have done to prove the innocence of the Haditha Marines. They have done the work that the paid media should have done. If there was a Pulitzer Prize for investigative work done by bloggers, David should win hands down.

Today new screenshots of the video from ScanEagle taken at Haditha on November 19, 2005 were released. These scenes were included in the video released by CNN but amazingly they neglected to show these particular images. These pictures prove, without any doubt, that SSgt Wuterich performed his duties in an appropriate manner and utimately saved many more Marines from death that day in Haditha. These pictures prove that the media, IVAW and John Murtha falsely accused our Marines of wanton acts of violence when in fact, the Marines were performing their duties honorably and completely within the rules of engagement.

The newly released images shine the light on the infamous white "taxi" and the 5 Iraqi "schoolboys". All along I've maintained that these 5 men were much more than innocent bystanders who just happened upon the IED attacked convoy. Intelligence reports confirm that plans were in the works for a massive attack against a Marine convoy and a white car would be involved. Testimony from Sgt. Dela Cruz contradicted this. Dela Cruz claimed that SSgt. Wuterich shot the men at close range while the men were in the act of surrendering. Dela Cruz' testimony has been quite inconsistent but because of the lurid details (he admitted urinating on one of the dead Iraqi men) the testimony has been the focus of media coverage.

This photo from the drone video shows the white car and the bodies of the Iraqi men as they appeared that day. 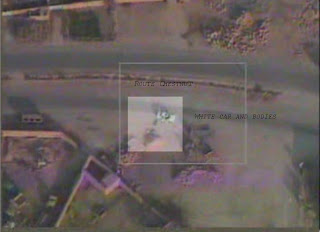 Notice the position of the bodies in relation to the car. They are all on the right side of the car and near the rear. Notice the structures near the bodies - dirt mounds, walls, etc. Pay close attention to the direction the car is facing. 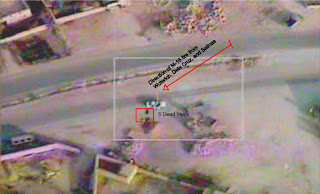 The red arrow shows the direction of the shots fired by Wuterich, Salinas and Dela Cruz. The Marines were on the left side of the car. The bodies are on the right side. Also notice the distance between the Marines and the occupants of the car. 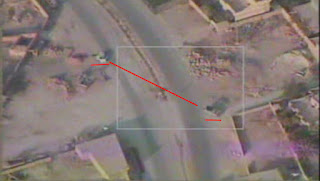 Above: Wuterich HUMVEE on right. White car is on left. Wuterich, Salinas and Dela Cruz shot to their left from about 20 meters (60 feet) away.

From SSgt. Frank Wuterich's statement at his Article 32 hearing:
"I remember encountering no vehicle traffic or foot traffic that morning leading up to the IED detonation. The white, four door sedan was parked on the side of the road within 100m of the IED attack, and within the security parameters of our convoy. I heard yelling mostly from the west where Cpl De La Cruz was shouting in broken Arabic and using expletives to the military aged males who occupied the white car. His weapon was at the ready, as it should have been. They were not complying and in fact were starting to run in the opposite direction to the south away from where Cpl Dela Cruz was approaching them. I took a knee in the road and fired. Engaging was the only choice. The threat had to be neutralized. Vehicle Borne IEDs were a serious threat and would have incapacitated our squad making us combat ineffective. I don't remember anyone else firing at the same time I was, although at a squad debrief later on I learned that Cpl Dela Cruz had engaged the men at the car at the same time as I did and Cpl Salinas reported that he had opened fire, as well. After I watched the military aged males fall to the ground, Cpl De La Cruz advanced on them and I saw him fire at the bodies as they lay before I turned to make my way to the casualties. That is when I started hearing small arms fire from the south."

Based on the drone video screen captures, SSgt. Wuterich's testimony is confirmed by the photos.

Now take a look at the "infamous" photo leaked to the Washington Post and used by the media to convict the Marines before they even had a chance to tell their story... 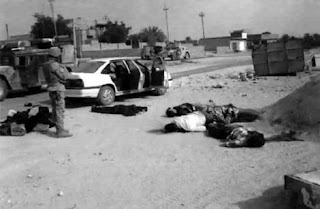 Notice the position of the bodies in relation to the white car. They are to the left and behind the car - AWAY from the Marines. Notice the proximity to the dirt mounds. These men were not surrendering. They were running away.

Now that we have a big picture of the scene and not some cherry picked inflammatory photo, it is obvious that SSgt. Wuterich fired on men fleeing the scene.

And a special note to Murtha, the media and Iraq Veterans Against the War - you have slandered honorable men. You will be called to account for your actions just as you insisted the Marines account for their actions. Now that the facts are out, you have been revealed to be nothing more than partisan hacks who willingly betrayed our Marines. You have no shame and will never know peace - we will see to that.

This is just shameful how You portrait this.... and a shame for your country.

I have been myself a professional soldier for about 8 years, 5 of them in the infantry where 1 year was in a middle east conflict zone as a rifle squad leader. Since when is it ok to engage anyone who does not pose a threat ? Where where theese men's weapons ? How do you think civillian, themselfes rattled by explosion, after beeing close to a IED targeting US soldiers should react ? When running away "as YOU say", what threat do they pose, and where are their weapons ?

Shameful, just plainly shameful... as the whole of the unjustified war with the following cost to Iraq.

BUT to the "defense" of your soldiers, they become and behave as shitty as their Leaders form them to.. From President, High command, brigade, battalion, company leaders and so on. Sending 18-19 year old freshmen to war like this is equally shameful.