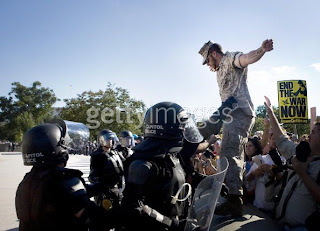 This is Adam Kokesh. You remember him - he got a general discharge for wearing his uniform while protesting the war and being on inactive reserve status. Yes he's still wearing the uniform. Yes he's attempting to jump the police barricade. He is the Poster Boy for the Iraq Veterans Against the War. He gave the IVAW's response to President Bush's speech Thursday night. Hopefully he's spending the night in jail. 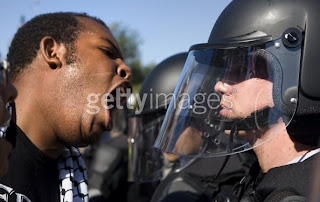 This is an intriguing picture. Do you think the policeman is wearing his face shield down because of the threat of violence from this protestor or is the police officer blocking the nasty breath of one of the great unwashed?

Note to the big mouth fool - wearing a kaffiyeh shows you are nothing more than a raging asshat. This guy is so lucky that this officer was a total professional or he would have been twitching on the ground from the tazer. Now THAT would make a great pic. 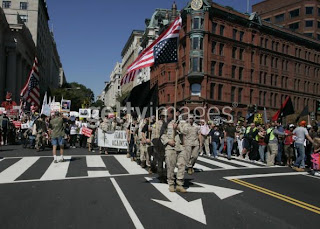 Here are the proud members of the Iraq Veterans Against the War marching in the protest parade wearing the uniforms and carrying the American Flag upside down. But they support the troops (snark)... 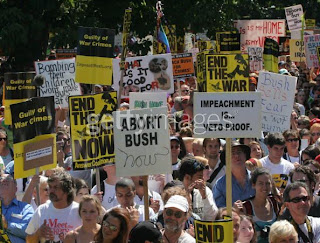 Here's an example of one of the tasteful signs at the anti-war, anti-American protest... "Abort Bush Now". Yeah that's class... 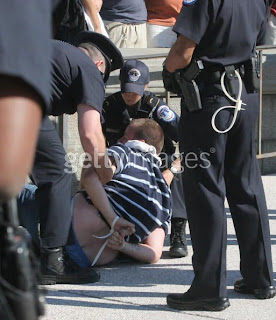 Having your crack exposed on national media while getting hauled off to the pokey - PRICELESS!


Hopefully he'll save this one to show his grandkids one day.


For more pictures from someone that was right in the middle of it all, pop over to This Ain't Hell. Jonn braved the spitting masses and got some great pics.

Yes ladies and gentlemen - these are the people driving the Democratic Party. Do you need any other reason to vote Republican?

Others blogging and more photos:
Michelle Malkin
Age of Hooper
The Redhunter
Victory Caucus
Posted by Robin at 9:20 PM