Sending Liberals Over the Edge Again 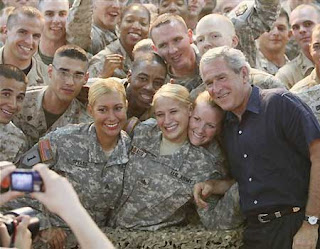 I just love how the President can make the Liberals go even more batty. Take today's trip to Iraq. The BDS crowd went ballistic - how dare the President go visit the troops? How dare he offer moral support to the soldiers fighting in Iraq? One KOS kid was pissed off that President Bush dared to SMILE while in Iraq. Yeah - that's a sign of mental stability - NOT.
No matter how much the Left tries to portray the soldiers as haters of Bush, the pics from Iraq certainly tell a different story.
May God Bless Our Soldiers & Marines, Our President and America. 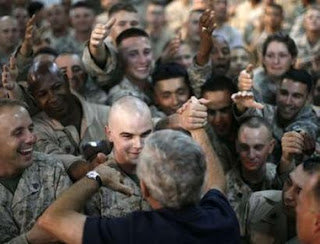 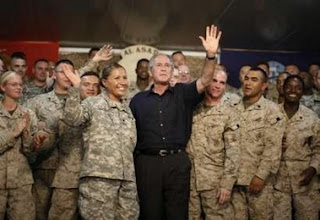 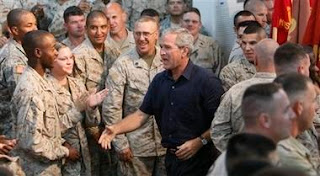 UPDATE:
Just how crazy does President Bush make them? Here's a few comments from DU here and here and some KOS thrown in for good measure....

please - if there is a God, and that God is just and merciful.............(or perhaps just pissed off at what Georgie has wrought in His/Her/Its/NoodlyAppendages name...... ) [come on you coward - man up and say what is really on your mind]

It's possible; PNAC may just "martyr" him for the cause [still beating the dead PNAC horse I see]

and under the cover of darkness, like a sneak-thief. If I were him, I'd be more afraid of our soldiers, than of the Iraqis. [couldn't resist a moment to trash the troops, huh?]

If I was the pilot...on the return visit.......I'd nose dive that plane right into the desert and do us all a favor. [like Clinton had the pilot on the Ron Brown flight do?]

I'd love to have a beer with him. I'd throw the beer in his face. [I bet you would crap your pants if you ever came close to the President]

He chose that godforesaken place because: Bagdhad is a mess and is totally unsafe, including the airport, roads to the airport - even the greenzone.

The shit hole he landed in is NOWHERE - is some out of the way forgotton place that nobody knows about. [read the newspaper moron - Anbar province has been in the news almost as much as Baghdad lately]

Why must he always find one of my brothers to stand on his left! That makes me so mad. He is trying to show how inclusive he is ~ well why didn't he get us out of Katrina! [can't resist throwing in some more Katrina racism tripe. why didn't you get yourself OUT of katrina?]

Why doesn't the stupid asshole stay in the White House he was so anxious to steal? [still can't get over that election loss, huh?]

do we have any independent, verifiable PROOF that * was in iraq today? (the sets of TDS come to mind) [you need to go up a size on that tinfoil headgear bud - I think your's is too tight]

They do have pics of GWB meeting with Maliki et al but I do not know if the pics were taken this trip or if they are old pics because part of the press pool backwash was that GWB was ignoring Maliki on purpose.
OTOH, this could be photoshopped as GWB is reaching across the table to shake hands with someone who appears to not be ready for the gesture. One guy on the other side has his eyes rolled to the ceiling and another one seems to be searching for a cigar. The Iraqi leaders appear to not be in tune with the photo op at all if the pic is legit. [another tinfoil hat wearing dumbass]

This one wins the prize for the most disgusting one from KOS and DU...

What happened to Labor Day? He flies off to Iraq to honor the mercenaries and murderers instead of staying here and honoring the American worker?

But don't forget they support the troops...
Posted by Robin at 9:04 PM